A Dickens Holiday is back! 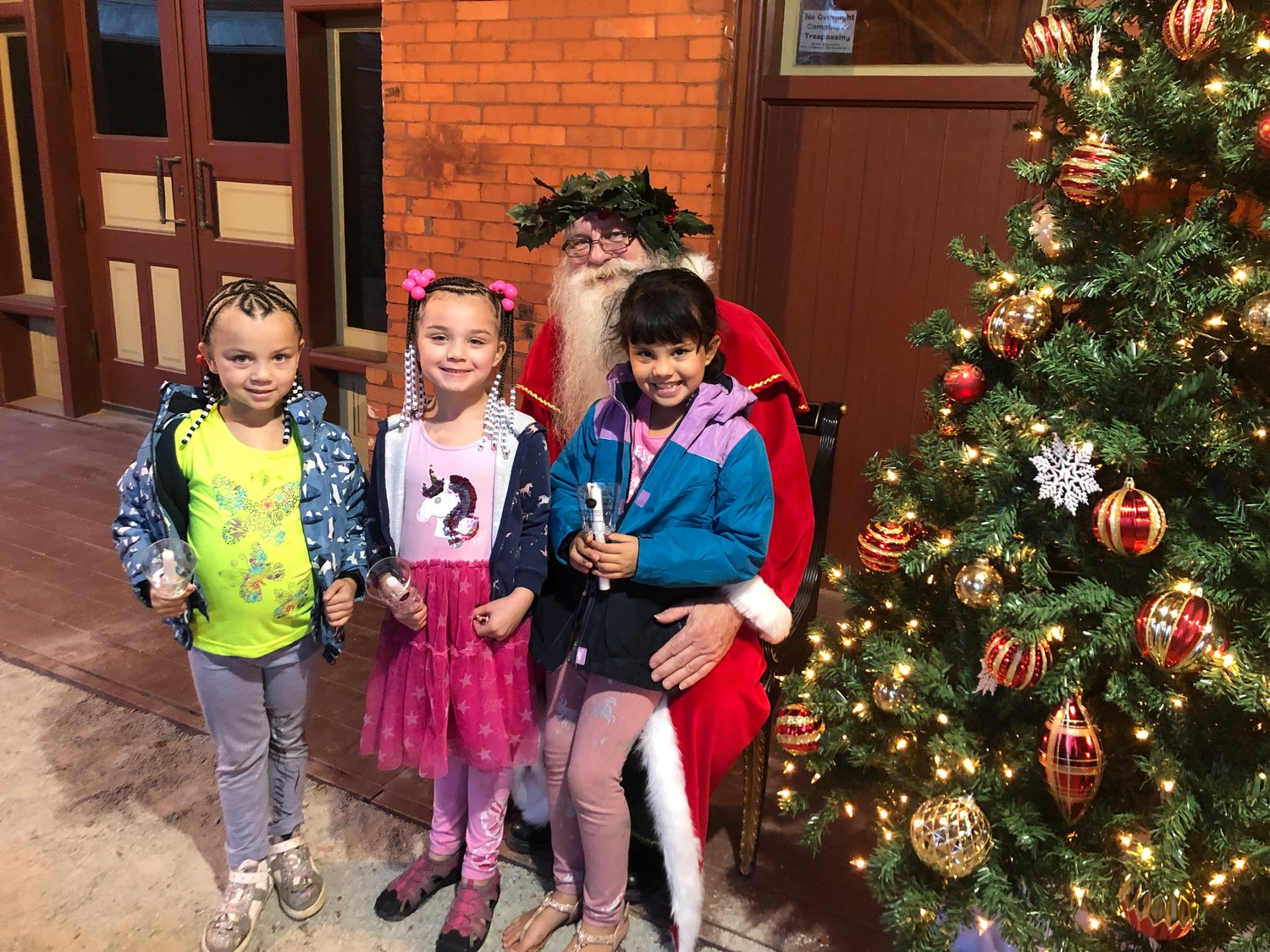 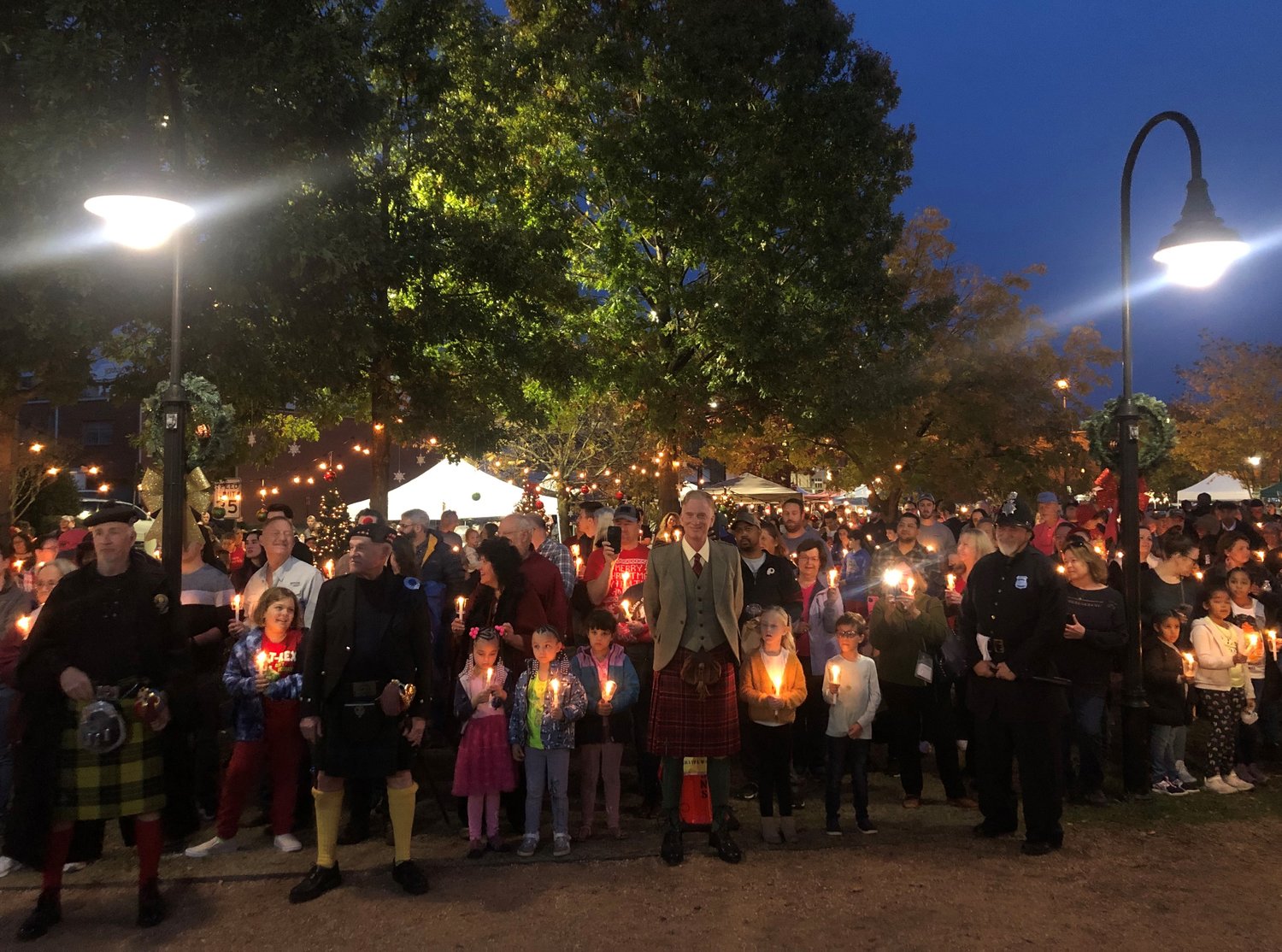 A large crowd awaits the arrival of Queen Victoria and her royal entourage. 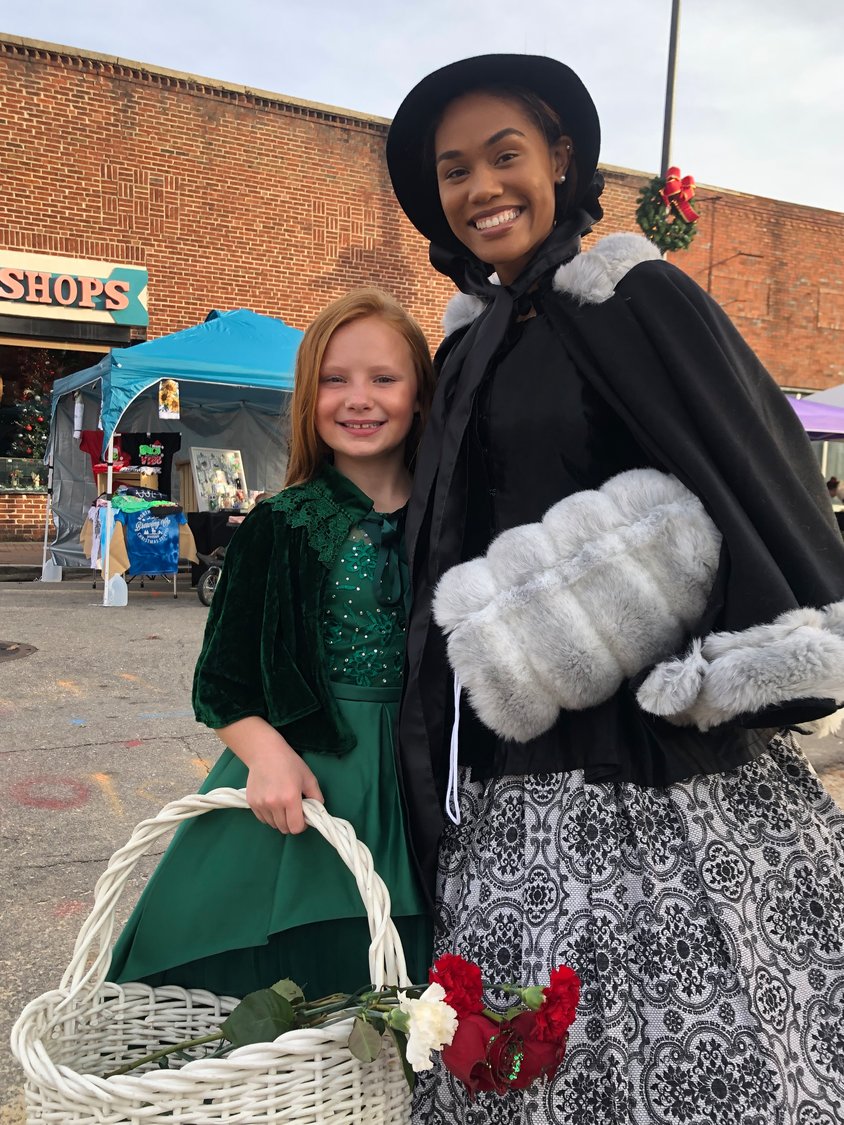 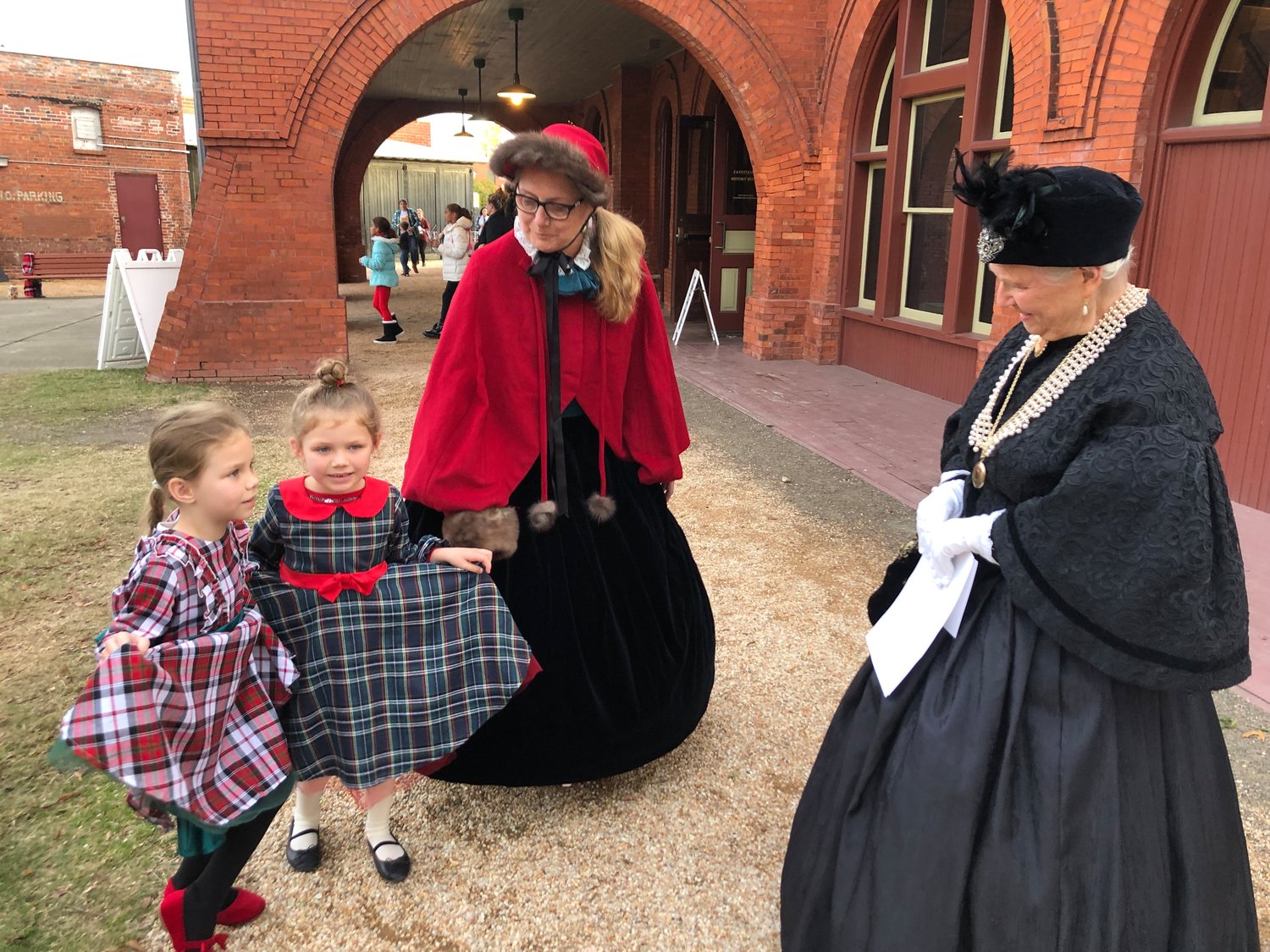 These young ladies demonstrate their curtsies for Queen Victoria. 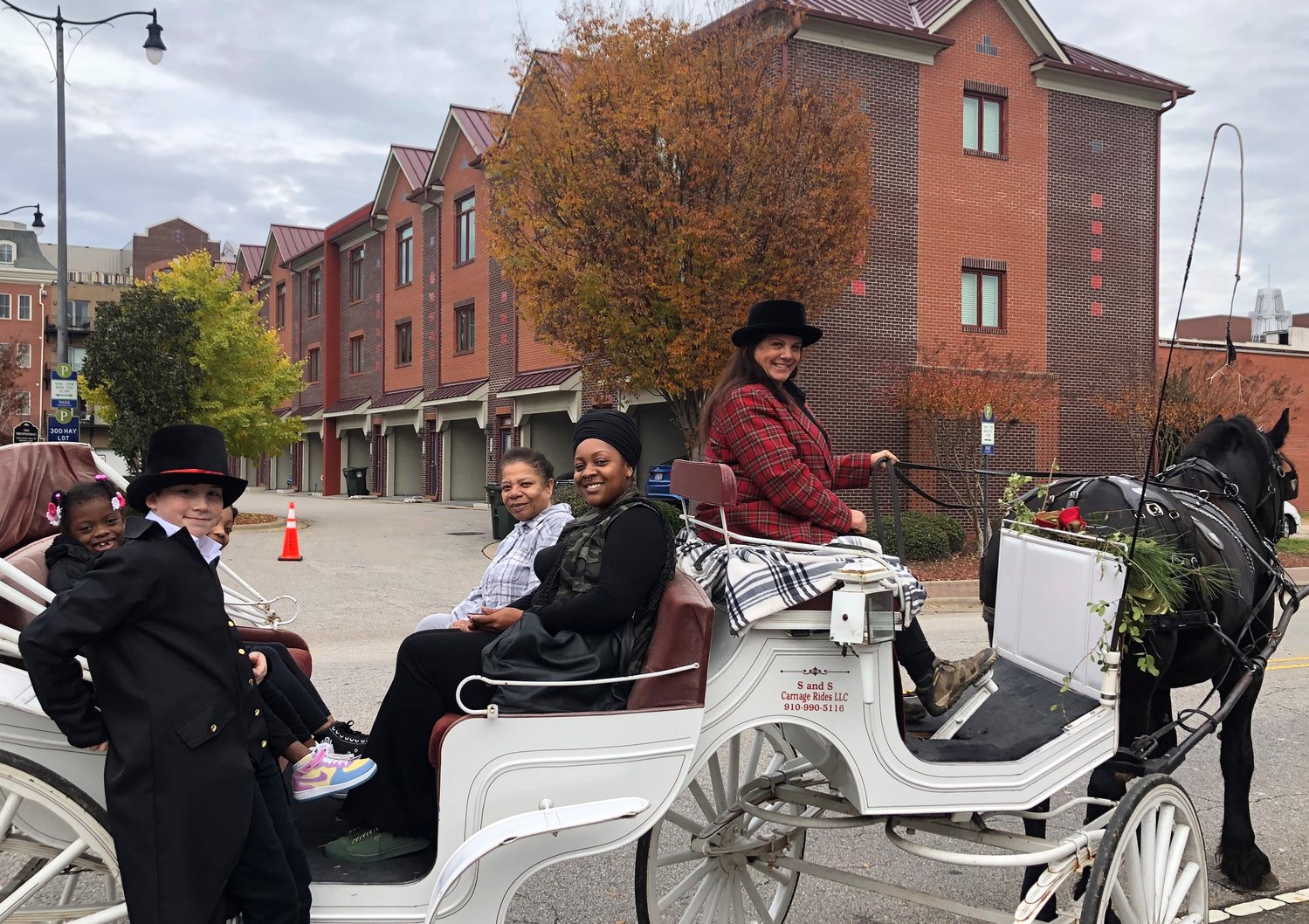 Carriage rides, sponsored by Cool Spring Downtown District, were sold out two weeks in advance. Scouts from Troop 747, like this young man, were able coachman’s assistants. 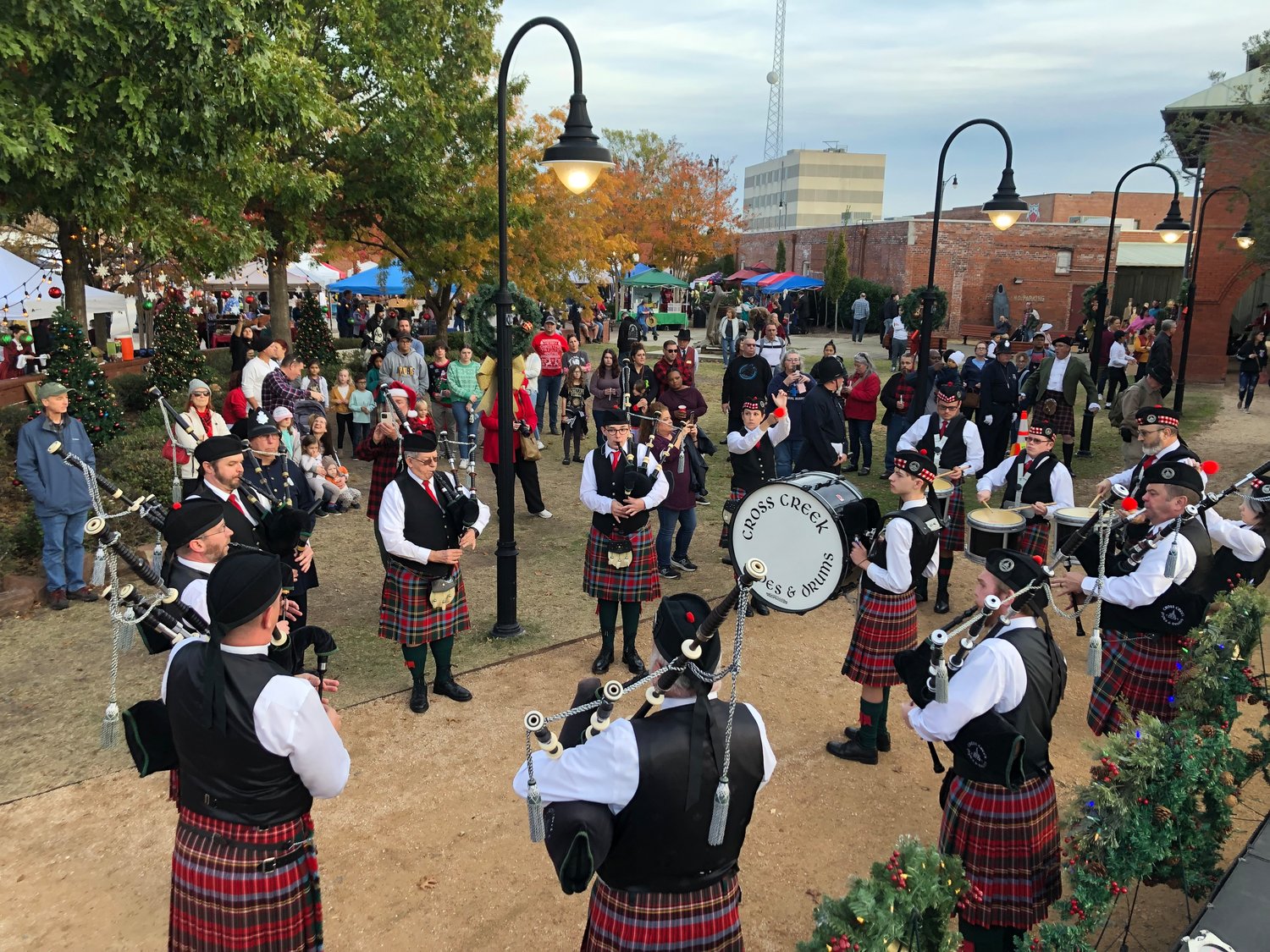 Queen Victoria was quite fond of the Scots, so it was most fitting that the Cross Creek Pipes and Drums performed for her. They include eight pipers and six drummers.
Previous Next
Posted Monday, December 5, 2022 10:12 am

Hosted by the Downtown Alliance and the Fayetteville History Museum at “Franklin Square,” where the Victorian-era train station served as a fitting backdrop, this time-honored tradition was attended by a diverse crowd that numbered in the thousands. And in the spirit of Charles Dickens’ A Christmas Carol, it was a joyous crowd greeting each other and expressing good will toward one another all day long.

As with any good event, the public seldom sees all the hard work that goes into its making. My purpose in writing this is to shine a little light on some of the folks who did the work on this beloved downtown celebration. And I do so not in any official capacity, but merely as a Fayetteville resident who has long believed in our downtown’s future.

Elaine Kelley, an Alliance board member and owner of Turner Lane, called me soon after my op-ed in the Aug. 28 Observer in which I questioned the Arts Council’s decision to cancel A Dickens Holiday. Her board members had voted to organize Dickens themselves. She asked if I would help, since I had been a part of the event since its founding.

I told her I would, but it seemed impossible! After all, we had less than 90 days for an event that is normally 10 months in the planning. In our favor, the Alliance had cohosted it for its first 20 years and most of our volunteers were still around. We agreed that she should chair the event and that I would round up the volunteers and sponsors and track down the popular performers from past years. Downtown Alliance president Isabella Effon, owner of A Taste of West Africa, let us hold our planning meetings at Volta Space in her building.

Downtown Alliance leaders — Elaine, Robin Matthews, Molly Arnold — and the History Museum’s Heidi Bleazey and Emily Sussman rolled up their sleeves and showed what leadership is all about. Perhaps it is no coincidence that so many of the successful downtown businesses are woman-owned and -operated!

Elaine Kelley especially deserves a big shoutout, even though she has resolutely refused any recognition. She worked on Dickens with uncommon passion and energy, even closing her business at times to devote a whole day to contacting vendors and performers and city departments. She assembled a team of marketers, headed by Betsy McElwee. She was on the ground as “central command” during the event itself.  Without Elaine, we would not have had A Dickens Holiday this year. Period.

And the volunteers: Their importance to an event with so many moving parts is paramount. If you were downtown on the day after Thanksgiving, much that you saw and enjoyed was the work of volunteers — the London bobbies; the poor street urchins selling flowers; the “coachman’s assistants” on the carriage rides (thank you, Scouts from Troop 747!); the English Country Dancers; the musical entertainment by the Fayetteville Symphony Youth Orchestra and Sinfonietta; the Cross Creek Pipes and Drums; Father Christmas; and even Queen Victoria herself. I cannot possibly name them all. And there were innumerable people who worked behind the scenes, like the folks from the Salvation Army manning the hospitality room for volunteers and performers. Volunteers even helped decorate the train station and surrounding grounds on the day before Thanksgiving.

Eighteen — that’s 18 — very generous sponsors gave the Downtown Alliance the financial wherewithal to stage such an event. The DTA is an all-volunteer association of downtown merchants, property owners, and residents, and it receives no funding from the city or county or any government agency. When asked, each and every sponsor said without hesitation “Yes” and “How much do you need?” Take a look at the Alliance website, www.faydta.com, to see the list of sponsors. Please patronize their places of business if you can and give them a big “thank you” when you see them. While online, look at the Alliance’s Facebook page to see some amazing pictures from Dickens.

So yes, A Dickens Holiday is back! The marvelous sights and sounds, the diverse crowds and performers, and the fun and relaxed shopping were all there. It is still exactly what its founders — the Arts Council and the Downtown Alliance — imagined it to be 23 years ago. The Arts Council should be proud of what it started. It is my hope that the Downtown Alliance will continue the tradition.

Now, in the words of Tiny Tim, “God bless us every one!”

DistiNCtly Fayetteville | New Website Launch — Have you done it 'Yette?

A Dickens Holiday is back!