Bill Kirby Jr.: Candied apples, cotton candy, funnel cakes and the carnies are back in town 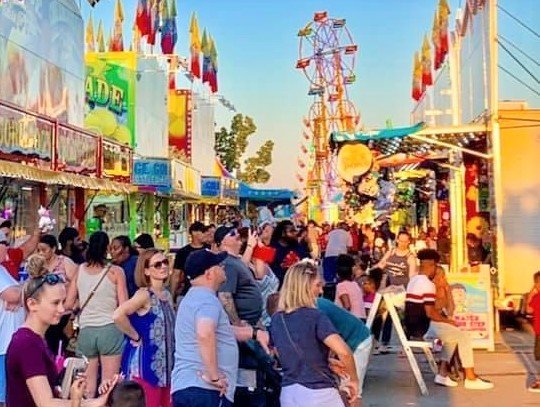 Fairgoers gather on the midway at a previous Cumberland County Fair.
Photo courtesy of Crown Complex

There is no better way to bring in the fall than the excitement of the county fair.”
Glenn Adams, chairman of the Cumberland County Board of Commissioners
By Bill Kirby Jr. | Columnist

There’s just something about the county fair.

From the candied apples to the cotton candy, to the aroma of onions and green peppers frying on the skillets to flavor a sausage dog, to the carnival hawkers tempting you to try your skills and win a teddy bear.

You don’t want to forget the amusement rides with their bright lights, from the double Ferris wheel to the Zipper to the Ring of Fire and the pony rides for youngsters. Don’t forget the livestock and agriculture exhibits, either.

Click here to find out about tickets and the live music schedule.

“The Cumberland County Fair saw just under 40,000 patrons through the gates for the 2021 fair,” says Tony Williams, director of the fair, which at 4:45 p.m. today will kick off a 10-day run through Sept. 12 at the Crown Complex. “We hope to anticipate the same number again this year.”

On hand for the ribbon-cutting will be Lisa Childers, director of the N.C. Cooperative Extension of Cumberland County; Toni Cooper, chief executive officer of the Greater Fayetteville Chamber; Matt McDonagh, owner of Big Rock Amusements; and Glenn Adams, chairman of the Cumberland County Board of Commissioners.

You are never too young or too old for the county fair.

“Many people think the county fair is all about funnel cakes and thrilling rides, but in all actuality, the fair was established for something much bigger,” Williams says. “Since the 1800s, farmers would compete in sheep-shearing competitions, bring in the best of the harvest to see who would gain bragging rights for the next year, and provide livestock demonstrations. Families would showcase their canning abilities, baking skills and needlepoint in home exhibits in hopes of winning the blue ribbon in their category.

“Today, we keep tradition alive in bringing agriculture back to center stage each year at the Cumberland County Fair.”

Competition keeps it lively, he says.

“Although it’s not all about winning, it’s nice to have some healthy competition,” Williams says. “Youths from across the region will come to compete in our livestock shows. As you enter the fair, past the ticket booths, you will immediately see the livestock arena, animals and youths busying around getting ready for the show. Through their devotion to these project animals, the youths are learning leadership, sportsmanship, financial skills, hard work and dedication.”

You will not want to miss this year’s “Field of Dreams” exhibit, Williams says. It’s a 1,200-square-foot showcase featuring agricultural products with a baseball theme.

“You’ll be amazed,” he says, “how integral agriculture is in your everyday life.”

‘Think you can sink one?’

Don’t know what it is about the county fair that intrigues me so. Been going since it was sponsored by the old Fayetteville Jaycees at the old fairgrounds downtown. I remember meeting “Jack Kochman’s Hell Drivers” in 1973 and once seeing The Captain and Toni Tennille in a stage concert. And taking up the carnie’s offer to try my hand at the Putt-Putt Golf hole.

“Think you can sink one?” the unsuspecting carnie wanted to know.

The carnie was none too happy with me by evening’s end.

“You’re done, young man, with this game,” the carnie said. “Don’t come back to my booth again.”

There will be something for everybody at the fair, from the Queen’s Pageant from 2 to 6 p.m. on Saturday and music daily on the Zaxby’s Entertainment Stage, featuring everything from country to Southern rock to rhythm and blues to gospel bands.

OK, you more daring folks want to know about the thrill rides. Big Rock Amusements, circa 2010, is back, and you can find attractions such as the Air Flyer, the Giant Wheel, the Himalaya, the Ring of Fire, the Rip Tide, the Sky Wheel and The Beast. For kids, there’s the Beach Buggy, Frog Hopper, Fun Slide, Ladybugs, Tea Cups and the Grand Carousel, aka the merry-go-round.

It’s the county fair, and it’s back in town.