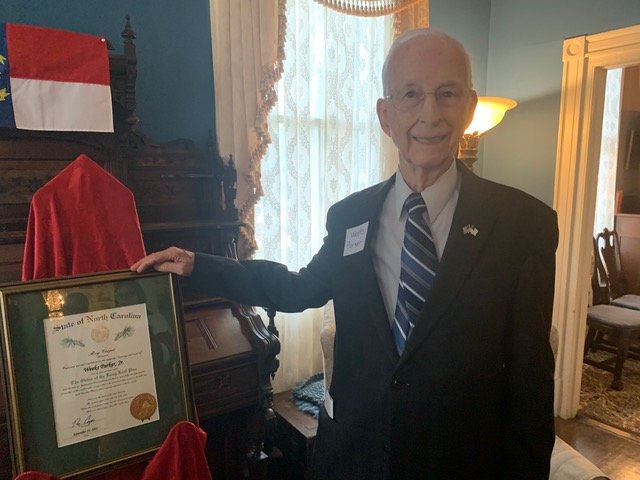 Weeks Parker Jr. was honored Saturday with the Order of the Long Leaf Pine at the Sanford House of the Heritage Square Historical Society.
Photo by Bill Kirby Jr. 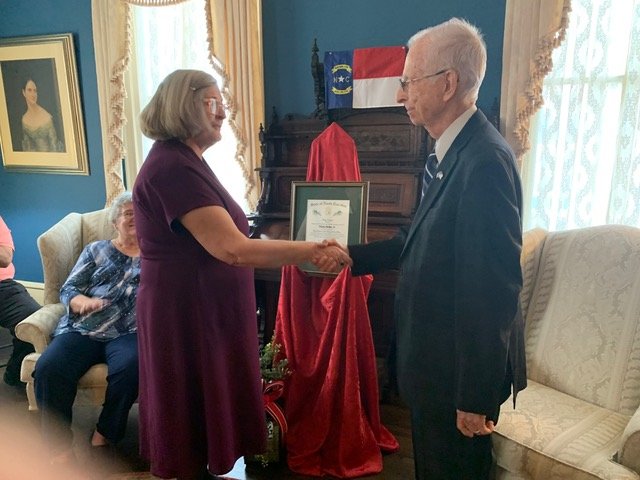 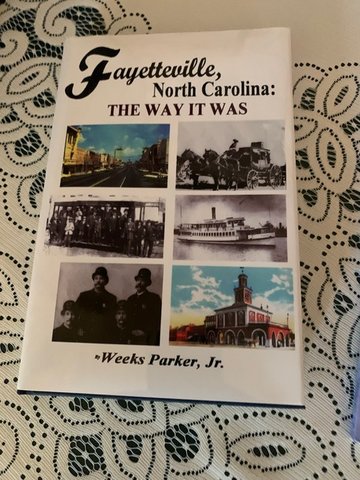 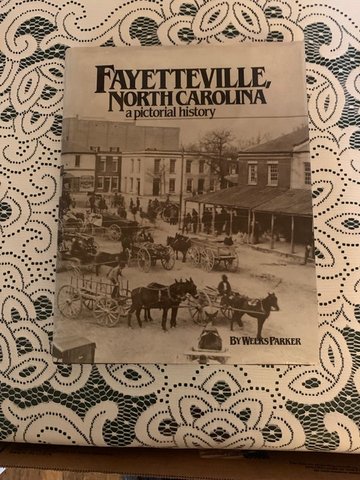 (Mr. Parker directed bands in these five schools, one day a week, and was paid for his teaching by

the parents because Cumberland County had no funds for a band director positions at the time.)

1978: How to Overcome Negative Thinking: In Yourself and Others

1996: How to Make Your Marriage Sparkle

2004: How I Became a Positive Thinker

2007: Fayetteville, North Carolina: The Way it Was

2017: The Amazing Power of Positive Thinking

2020: How to Deal with Evil and Domineering People

1947-1957: Led a 12-piece orchestra performing at Fort Bragg service clubs such as the Main Post Officer’s Club and for the USO Club in Fayetteville that was the largest USO in the world at the time.

1975: Led Fayetteville Lion’s Club Committee for research in electronics for the benefit of the blind and deaf

Since 1984: Member of the Cumberland County Historical Society

2013: Served on the Historical Committee for the Baptist State Convention

2003 - Award from Mayor Marshall Pitts Jr. for serving as an Ambassador for the City of Fayetteville

2008 – Awarded membership in the ’50-year Snyder Memorial Membership Club’ in recognition of his membership since 1958 by Pastor John J. Cook II

2009 – Plaque from the Cumberland County Historical Society for dedicated service

His has been a life’s work about Fayetteville in words and thousands of his collection of historic photographs from the Great Fire of 1831 to the Great Flood of 1908.

Weeks Parker Jr. is an author, photographer, historian, engineering icon and musician, too.

“I was born here, and I wanted to learn all I could about my hometown,” says Parker, 92, who on Saturday was celebrated at the historic Heritage Square Historical Society as a recipient of the Order of the Long Leaf Pine.

Lynda Deaton, president of the historical society, presented the honor on behalf of Gov. Roy Cooper. Usually, the award goes through a state legislator. Deaton went straight to the governor’s office in telling Cooper about Weeks Parker Jr. and what his works mean and have meant to this community. And she had plenty of support from others, too.

“Almost everyone that I contacted to discuss recommendations for Weeks Parker Jr. for the nomination for the Order of the Long Leaf Pine believed that he fully deserved it,” Deaton says. “Over and over again, I learned about a modest man of impeccable honor, love of his hometown and a generous person with the desire to pass on to his community his talents, knowledge and invaluable historic research. All along this journey, I felt that I was being led by a higher power to ensure that Weeks received this honor he so richly deserves.”

Weeks Parker Jr. was born in the old Pittman Hospital downtown, where City Hall stands today along Hay Street. He grew up on Rowan Street, just yards from Saint James Square where the Confederate monument once stood. His father, Weeks Parker Sr., owned and operated the Champion Auto Equipment Co. in the 1920s through the 1940s at the corner of Bow and Cool Spring streets, and not far from where Weeks Parker Jr.’s great uncle signed the Liberty Point Resolves. His mother was Mattie Belle Maultsby Parker, who worked as a secretary for the automotive equipment company.

That’s about all he failed.

He attended Presbyterian College in Laurinburg.

He had a curious mind, and an analytical mind when it came to ham radio.

And a love for music.

Weeks Parker Jr. has left his DNA all over Fayetteville’s history, and many Cumberland County lives that have been touched by him.

“My interest in old Fayetteville photographs started in 1963 when someone gave me a rare picture postcard of a parade down on Hay Street that had been taken from the balcony of the Market House in the early 1900s,” Parker says. “When I showed that picture to my friend the late Bob Gray, who was one of the editors of The Fayetteville Observer, he told me he would print it in the paper along with a caption asking anyone who had similar pictures to contact me so I could make copies for the Observer and for myself. After that one picture appeared in The Fayetteville Observer, I received many faded pictures that I restored in my dark room. I now have more than 1,000 rare, collector's item photographs in my collection, thanks to Bob Gray.”

His passion for old Fayetteville and Cumberland County photographs has been a work in progress ever since, as well as his knowledge of the stories behind the photographs.

“I do have lots of pictures of the 1908 flood that almost washed the old Clarington bridge away,” Parker says. “The Cape Fear River was once called the Clarington River, and before that, it was known as Sapona River named for the Sapona Indians, who once resided in Fayetteville.  After surviving the flood, Chief Britt of the Fayetteville Police Department made a very unwise decision to burn some trash near the old wooden Clarington toll bridge that was on Person Street. After the bridge was destroyed, it was replaced by a steel bridge so it could never be burned again.

“Some of my favorite pictures in my collection of more than 1,000 are the volunteer Fayetteville Police Department, when its headquarters was in the Market House and they wore British Bobby hats and carried only a nightstick called a ‘Billy’ for protection.

“Other pictures I really like are pictures of the three different street cars that once ran on rails along the center of Hay, Gillespie and other streets,” Parker says. “I have a spike and a cross tie from those tracks. I also have a painting of General Sherman's army as they marched up Hay Street while their band played ‘Dixie.’”

There would be more photographs to collect, and a story to tell with every photograph.

“It is now sealed into a time capsule at Point News, across from the Hay Street Methodist Church,” he says. “I later wrote two other history books about Fayetteville.”

‘His work is a lasting legacy’

You will find his manuscripts on library shelves, where those with an interest in this city and county history find them as a valuable resource, including high school and college students as well as Bruce Daws, the city historian.

“Weeks Parker's knowledge and passion for Fayetteville history, resulting in a book and numerous articles, has added so much to the quality of life and culture in our community,” Daws says. “During my career as the city historian and Fayetteville History Museum director, his book on the pictorial history of Fayetteville has constantly been used as a reference. The pictures of buildings and homes in his book are used when property owners are engaging in returning a structure to its original appearance. Over the years, Mr. Parker has collected many original photographs that have been published in his works. His work is a lasting legacy, which reflects highly upon him. Weeks Parker is most deserving of the Order of the Long Leaf Pine.”

Jerry Wood, who became associate president at Campbell University, learned how to play the saxophone as a student more than 60 years ago at Pine Forest High School.

"His pictures and stories of significant locations and people are priceless,” Wood says.

The Rev. Wayne Ham has known Weeks Parker Jr. for 52 years and describes him as “a man of great moral character” and the “Fayetteville Picture Man” because of his collection of historical pictures that he graciously lends out and displays.

‘A wealth of historical knowledge’

says, was only fitting for the Order of the Long Leaf Pine presentation.

“Here at Heritage Square, we desire to do more than just preserve and maintain three historic structures all listed on the National Register of Historic Places,” Deaton says about the Sandford House (circa 1797), the Oval Ballroom (circa 1818-1823) and the Baker-Haigh-Nimocks House (circa 1804). “We want to share with others the history and growth of Fayetteville.”

She met Parker about a year ago.

“I had inquired about some historic structures that have long since been destroyed that I remembered as a child and one pre-American Revolutionary home …  the Robeson House on Person Street that my parents had their home and florist business in until it burned in 1957,” she says. “Weeks and I shared our love of our hometown and its history, and a friendship began. Weeks wasted no time in bringing to Heritage Square a wealth of historical knowledge of our community. His generosity in sharing that knowledge with us has been invaluable in our research and education.”

About 50 people gathered Saturday afternoon in the elegant Sanford House, where Deaton and Cassandra McMillion, secretary for the HSHS, would tell us about Parker’s long list of lifetime accomplishments before Deaton would unveil the Order of the Long Leaf Pine, the highest award a state governor can bestow for significant contributions to the state and communities.

“I am very humbled to receive this honor,” Weeks Parker Jr. would say. “I never thought I would receive it. It humbles me. It makes me very humble. Receiving the Order of the Long Leaf Pine signed by the governor of North Carolina is a humbling experience that I never imagined I would ever be worthy enough to receive.”