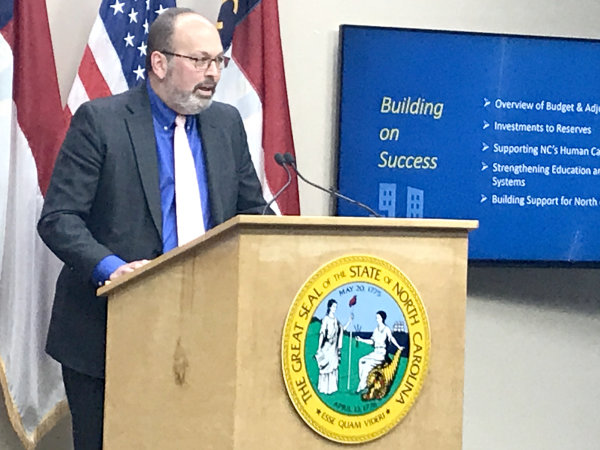 In the proposed state spending plan that Gov. Roy Cooper released on Wednesday, he not only makes another push for Medicaid expansion but also recommends making a $45 million investment into North Carolina's health care workforce.

Cooper put forward a $29.3 billion budget, nearly $2.3 billion more than initially planned for in the fiscal year that begins July 1.

The Fiscal Research Division of the North Carolina General Assembly revised its Revenue Consensus Forecast upward earlier this week to show that collections over the past year totaled $4.2 billion more than predicted.

State lawmakers, who ultimately hold the purse strings for how much will be spent over the next year, are set to begin their so-called "short" legislative session on May 18.

In a letter to Phil Berger Sr., the Republican from Eden who leads the state senate, and House Speaker Tim Moore, a Republican from Kings Mountain, Cooper described his spending proposal as one that "builds on our success by investing in North Carolina families, businesses, and communities."

"Families experienced tremendous stress through the COVID-19 pandemic, but have emerged to find that they still struggle accessing affordable health care, housing and childcare," Cooper said in the letter accompanying his proposal. "This budget addresses those needs by expanding access to more than 600,000 working North Carolinians, making housing more affordable through down payment assistance and construction of additional rental housing, and investing in the early childhood educator workforce."

The proposal to expand Medicaid to more than 600,000 North Carolinians has pitted Cooper against Republican lawmakers in the past, leading to a stalemate that left the state without an official budget from 2018 until shortly before Thanksgiving in 2021.

An agreement to study Medicaid expansion was included in the budget that Cooper and Republican lawmakers negotiated last fall.

Since February, a panel of lawmakers led by Republicans has been weighing the possibility of expansion. They do not plan to issue recommendations for the General Assembly to consider until late summer or early fall, weeks if not months, after the start of the fiscal year.

"I personally believe we've needed Medicaid expansion for a long time," Cooper said at a briefing with reporters on Wednesday. "We're in a different spot now than the last couple of years."

The federal government has issued an incentive for North Carolina and the 11 other states that have not yet expanded Medicaid as the Affordable Care Act has allowed since 2013.

The federal government subsidizes 90 percent of the cost for adults enrolled through the ACA expansion. The American Rescue Plan Act of 2021 provides additional financial incentive.

For North Carolina, it’s a tidy $1.5 billion over the next two years.

Though there is support in the state Senate for expanding Medicaid, some Republicans in the state House have not yet embraced the idea. Cooper said he is not deterred.

"I continue to hear everyone, particularly Republican leaders who are concerned about the mental health of people, the substance usage or increase that we're seeing, a lot that happened during the pandemic," Cooper said. "The very best, most cost-effective way to tackle that is to expand Medicaid."

The governor also encouraged lawmakers from rural districts, where hospitals are struggling and even shuttering, to support widening the window for those who would be eligible for Medicaid to expand health care access in those regions. Medicaid expansion, according to Cooper's budget, would inject more than $5 billion into the state's economy and create 37,200 jobs.

As new companies come to North Carolina and the state population grows, lawmakers have heard about shortages in the health care workforce during the pandemic and problems expected in the future. A report published earlier this year from researchers at UNC Chapel Hill’s Sheps Center for Health Policy estimated that the state could be short as many as 21,000 nurses within a decade.

The current nursing shortage and a glimpse of what the future could hold troubled lawmakers on the Joint Legislative Committee on Access to Healthcare and Medicaid Expansion.

Charles Perusse, the state budget director, mentioned that on Wednesday during a briefing with reporters in which he elaborated on some of the proposals in Cooper's spending plan, including the $45 million investment to help tackle the problem.

The funding would be divided equally among the state's community colleges, the UNC system and private colleges, each getting $15 million to hire additional faculty and staff, add equipment and lab space, and offer student support to channel more people into health care jobs.

"I've seen some studies that say we're going to need upwards of some 15,000 RNs and LPNs to keep up with our growth over the next 10 years," Perusse said.

This article first appeared on North Carolina Health News and is republished here under a Creative Commons license.