Just days before Elvis Presley’s death in 1977, Fayetteville pianist Milton Smith was preparing to join his concert entourage. Instead, he played The King’s cherished hymns for his funeral at Graceland estate. 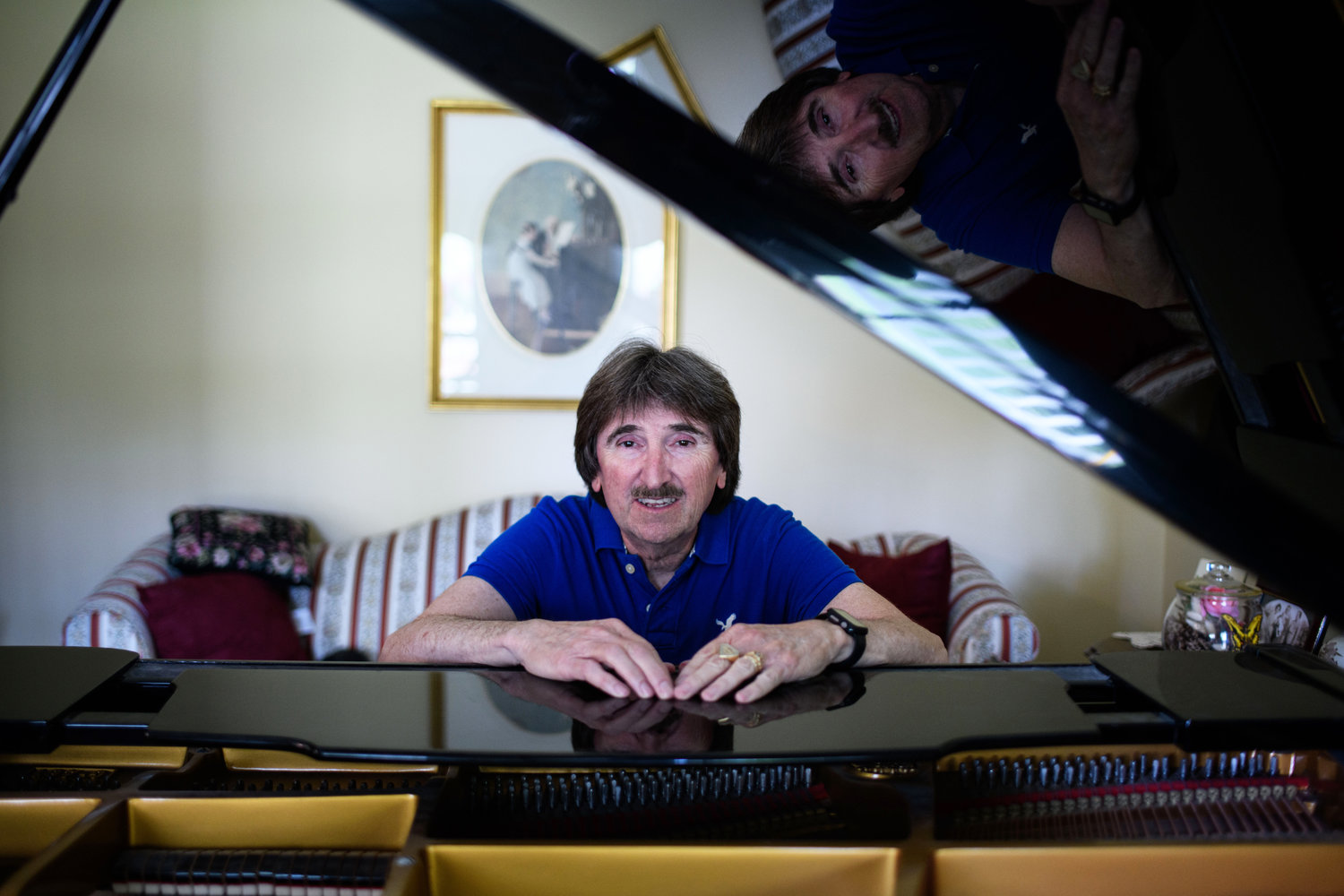 Milton Smith missed the opportunity to go on tour and perform onstage with Elvis and his band, playing at his funeral instead.
Melissa Sue Gerrits 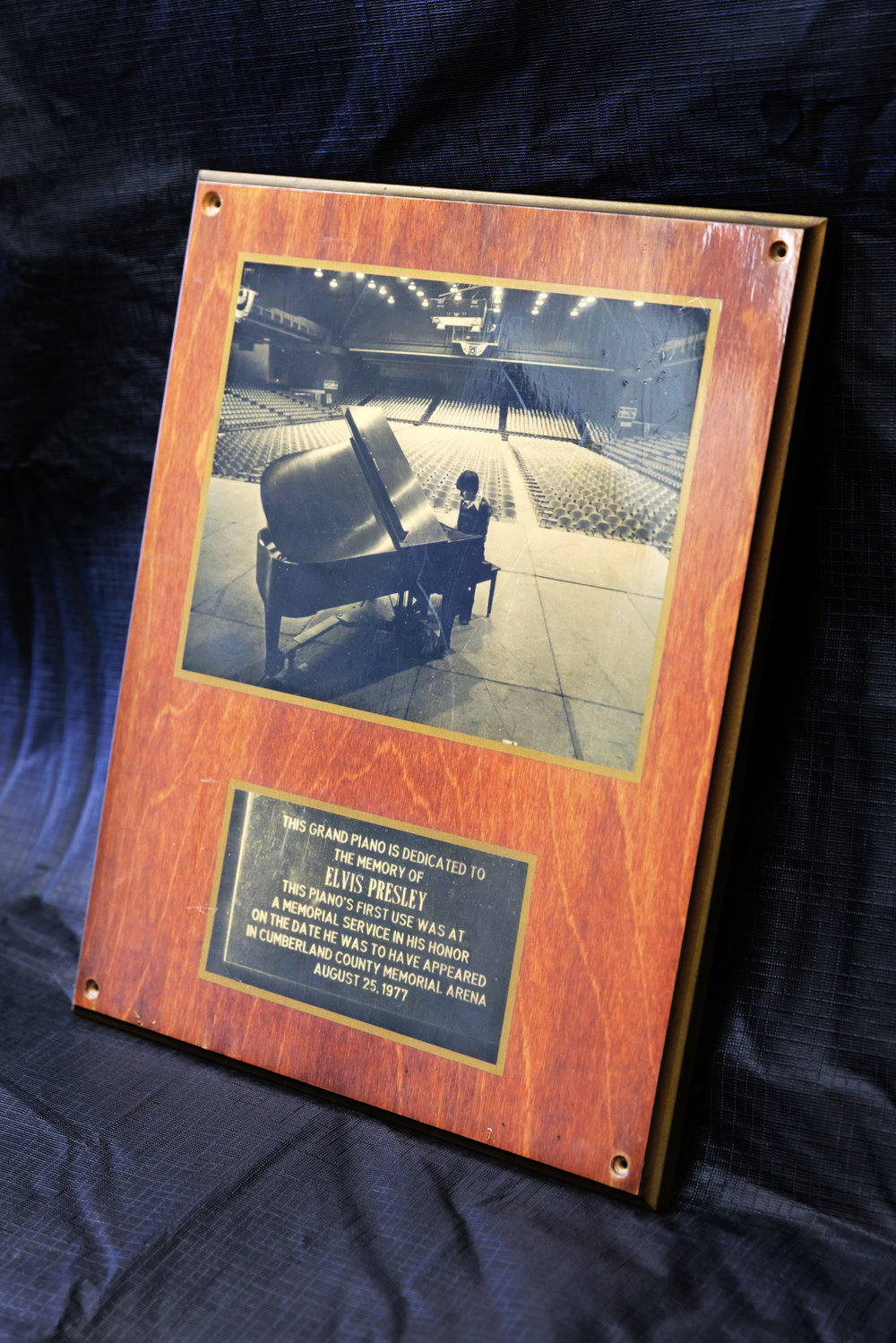 Milton Smith is pictured on a plaque playing a grand piano that was dedicated in memory of Elvis Presley at the Cumberland County Memorial Arena. Smith played at a memorial service at the arena on Aug. 25, 1977, the day Elvis was supposed to appear in concert there.
Anthony Wooten
Previous Next
Posted Wednesday, August 17, 2022 8:16 pm
By Michael Futch, Photography by Melissa Sue Gerrits

It was without a doubt the best gig a gospel pianist could dream of:
On the road with Elvis Presley.
But Milton Smith never got to the first stop on that concert tour. After years of declining health and personal struggles had taken their toll, Elvis had left the building. The legendary showman, whose grinding hips and mischievous smile only magnified his instinctive musical style, died a day before the tour was to begin.
Instead of performing on a concert stage, Smith played for The King — at his funeral.
Smith, a longtime music instructor for Cumberland County Schools, missed the opportunity of a lifetiwme to go on tour and play onstage with Elvis and his band.
Aug. 16 will mark 45 years since Elvis died in 1977. In many ways, he had become a bloated caricature of himself and the butt of comedians’ jokes. Yet he retained his sexy, deep voice that fans couldn’t help falling in love with, turning mediocre material into pure gold.
Milton Smith played some of Elvis’ favorite hymns during his funeral at the singer’s Graceland estate in Memphis, Tennessee. Despite the circumstances, that funeral gig remains the high point of Smith’s long career in music.
“That’s it. It’s the top,” he says.
The story of Smith’s near-miss on the Elvis train is a story of lost opportunity.
When Elvis’ backup group, J.D. Sumner and the Stamps, needed a piano player, Smith was unexpectedly offered the job. Sumner and the Stamps performed with Presley from 1970 to 1977. Smith was set to play piano largely during the gospel portion of Presley’s live stage shows.
The musician’s dream came to an abrupt end on Aug. 16, 1977, the day that Elvis Aaron Presley died. Doctors have said that Presley had a heart attack that was likely brought on by his addiction to prescription barbiturates.
One of the dates of that planned concert tour included an Aug. 25 show in Fayetteville. Instead of a concert featuring one of the best-known figures in the world of pop music, the Cumberland County Memorial Arena would present a tribute show in Elvis’ memory.
Smith played piano on stage during that concert, which was staged nine days after Presley’s death.

‘How would you like to play for Elvis?’
Time has been kind to the humble Milton Smith, whose looks have changed little as the decades have passed. His mop-top Beatles-style hair is dark, and his mustache is neatly trimmed.
A native of Bladenboro, Smith has lived in Hope Mills and Fayetteville since returning home from Nashville in 1974. That same year, he started teaching music and was the assistant band director at Cape Fear High School.
Later, he would play piano for 3½ years on tour with country music star Tammy Wynette.
Early on, he and his wife, Colleen, lived in a 46-foot-long trailer on Doc Bennett Road on the outskirts of Fayetteville. One day the phone rang, and it was Larry Strickland, the husband of country singer Naomi Judd and a member of the Stamps quartet.
“He said in his deep voice, ‘How would you like to play for Elvis?’ I said, ‘C’mon, man.’
“‘No, I’m serious. I’m very serious,’ he says. ‘We need a piano player, and if you play with us, you’ll be playing for Elvis some, too.’”
Ed Enoch, the manager of the quartet, then got on the phone.
“We want you. We hear you do a good job. Larry says you really do a good job. We want you to come to Nashville, and let’s meet,” Enoch told Smith.
“Here I am with a full-time teaching job. You know, it’s kind of scary to give that up,” Smith says. “Colleen and I talked it over, and we decided, ‘Sure.’ They paid all our expenses, an all-expense-paid trip to Nashville; put us up in the nicest hotel downtown. Then we went out to Larry’s house and, just about time we were getting there, (Stamps lead singer J.D. Sumner) was pulling up in a limo. Come to find out, that was the limo that Elvis had given J.D.”
Presley was known to give new Cadillacs as gifts to friends and employees.
The Stamps — with Smith in tow — made the pilgrimage to Graceland about three weeks before Elvis died to begin rehearsals for the upcoming tour.
Smith came close to meeting The King, but it never happened.
“I didn’t get to talk to him personally,” Smith remembers. “We rehearsed at the house. Elvis was asleep; he was in the bed. I was praying Elvis would get up and he would come down.”
Smith says the first time the Stamps bus pulled up at Graceland, Elvis and Priscilla Presley’s daughter, Lisa Marie, approached them in a golf cart.
During their hours of rehearsals, Smith says, he played Southern gospel numbers including “How Great Thou Art” and “I Can Feel the Touch of His Hand.”
He thinks he rehearsed nine or 10 songs for his part of the Elvis show, while also practicing the songs he would perform with J.D. Sumner and the Stamps.
The day before the first concert of the tour, which was set for New England, members of the Stamps band converged in a private hangar area at the Nashville airport.
“We were all standing around and waiting to go on the trip,” Smith says. “The plane was in the air. We were all standing around.”
Felton Jarvis, Elvis’ record producer from 1966 to 1977, told them to gather around him. He had some news from Colonel Tom Parker, Elvis’ longtime manager.
“The Colonel called me and said, ‘Due to an act of God, the concert tour has been canceled,’” Smith remembers Jarvis telling them. “I always thought that was a strange way of telling us that the tour was off. l always did.”
Elvis was 42.
Ginger Alden, the singer’s girlfriend at the time, found him unconscious on his bathroom floor at Graceland.
His modest funeral would be held two days later on Aug. 18, 1977. Leading the procession was a 1977 Cadillac Sedan de Ville followed by a white 1977 Cadillac hearse.

‘Hoping that I wouldn’t mess up’
Smith played Elvis’ Steinway grand piano at Graceland on the day of the funeral.
On his own grand piano in his Fayetteville home, Smith keeps the artificial pink roses that decorated Elvis’ piano during the funeral. They are enclosed in glass, and he has added a colorful, artificial butterfly to the flowers.
Smith remembers playing prelude music and gospel hymns in Graceland’s dining room, which was set up with chairs to look like a little chapel. In attendance were Priscilla Presley, Colonel Tom Parker, guitarist James Burton from Elvis’ band, singer James Brown, actor George Hamilton and actress Ann-Margret, Smith remembers.
“There were so many there,” Smith says. “A lot of them worked for him.”
Elvis’ body lay in his coffin just behind Smith at the piano. Earlier, rehearsals had been staged in front of the coffin.
So what was it like for Smith to play at the funeral of a larger-than-life man he had always been a fan of?
“Surreal,” he says, “that it’s really happening.”
Smith played for the Stamps to sing, and he played “Danny Boy” for Vernon Presley, Elvis’ father.
Smith says there’s no doubt that Elvis would have loved the music he played at the funeral. Elvis loved the sound of gospel, which influenced nearly everything he did. Among the songs Smith performed were “How Great Thou Art,” “He Touched Me,” and “Amazing Grace.”
“We were so in awe of what was going on,” he says. “I was just hoping that I wouldn’t mess up.”

In and out of the spotlight
Smith continued to perform on the road with the Stamps for several months. The group would perform in Elvis tribute shows.
“It was a great situation,” says Smith. “I met Tammy (Wynette), and that was a better situation for me.”
Smith met Wynette while performing at the MGM Grand hotel in Las Vegas, and she invited him to join her band, the Tennessee Gentlemen.
After his stint with Wynette, Smith returned to Fayetteville to teach at Westover High School. For a time, he played with The Singing Americans, a North Carolina-based gospel band known for perky, upbeat performances in churches across the country.
In 2010, he was inducted into the Fayetteville Music Hall of Fame.
He performed twice for President Ronald Reagan, once at the Firecracker 400 NASCAR race in Daytona, Florida, and once at a political rally in Georgia.
Eventually, Smith left the concert circuit and returned to Fayetteville to run his own business, producing and recording music in his studio. He is also a full-time keyboard player for Fayetteville Community Church.
On occasion, he has taken a short break from the studio and the church to play for the gospel groups the Bill Gaither Trio and the Gaither Vocal Band.
“My life changed just like that,” he says of how Elvis’ early death affected his career. “I think that it would have been somewhat different. But I wouldn’t say totally different.”

Elvis has now returned to the public eye via a new movie that stars Austin Butler in the title role and Tom Hanks as Colonel Tom Parker, a Dutch-born musical entrepreneur best known for being Presley’s manager.
“Tom Hanks did a good job. I thought he did a good job,” Smith added of Butler’s performance. “Their guy had all the moves down.”
Smith says he took his 30-year-old son, Micah, to see the movie when it first opened in theaters.
“He didn’t really get into Elvis until he saw the movie. Now he loves his music,” he says from the piano room of his Fayetteville residence where he runs his recording studio and Milton Smith Productions.