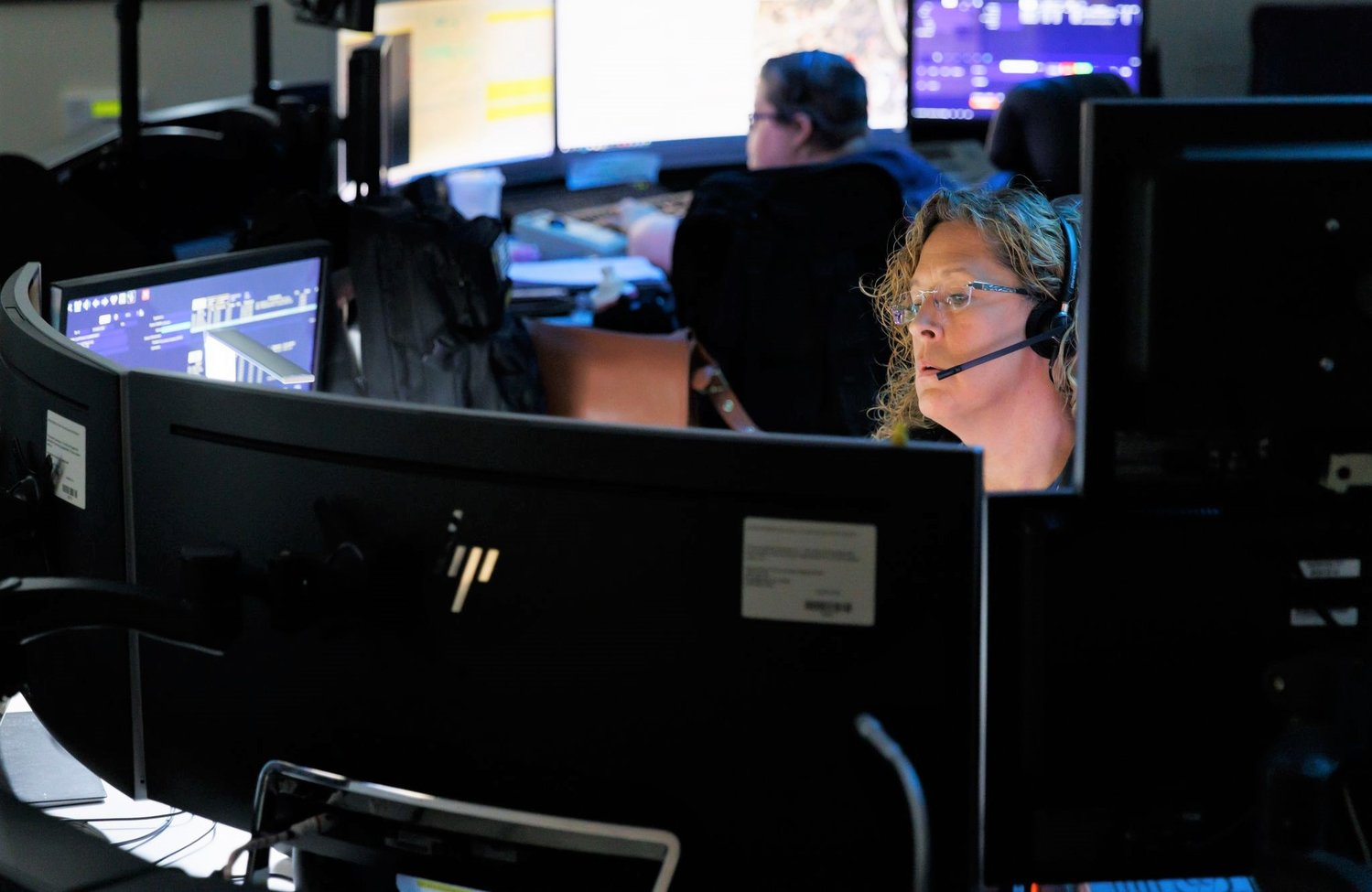 A 911 operator monitors calls at the Emergency Communications Center at Fayetteville police headquarters. The facility is among those that city officials hope to update if voters approve bond packages in November.
Photo by Tony Wooten
Posted Friday, September 23, 2022 9:50 pm
By Michael Futch | Staff writer

An information session to talk with residents about the three bond packages that will be on the Nov. 8 ballot for Fayetteville residents drew a small crowd Friday.

The education and information sessions are part of the city’s marketing strategy to promote the general obligation bonds, The sessions are scheduled through Oct. 12. Friday’s session was at the Westover Recreation Center.

Referendums on the three plans that are part of the Fayetteville Forward Bond proposal will be decided by voters in three separate ballot questions.

The $97 million in proposed bond packages would spend $60 million on public safety projects, $25 million on infrastructure improvements and $12 million on housing opportunity programs.

Turnout for those, she noted, also “has been on the light side. I’m really wanting to get the word out from the meetings so that residents will be able to make an informed decision at the polls.”

The purpose is to move the city forward with life needs and transformative efforts, Olivera said.

To pay off the bonds, the property tax rate for Fayetteville residents would increase by 4 cents in 2024, Olivera said.

Olivera said city representatives are not trying to encourage people to support or oppose the bonds, they are only trying to educate residents on what the bond money would mean to the city in terms of proposed projects.

“This place should have been packed,” Jose Cardona, a 71-year-old who lives in the Devonwood subdivision, said of the sparsely attended event at Westover.

"This place should be packed,” Olivera said, agreeing with Cardona.

She urged those who attended to talk to other people from their neighborhoods and other areas of the city.

The three who attended later said they do not support the proposed bonds.

“This is just a dog and pony show,’’ Cardona said after leaving the meeting. “The mayor’s not here; the city council is not here.”

And his reason behind a thumbs down on the bonds: “Because, again, this could be handled by the city and (Fayetteville) PWC,” he said. “They just have a little extra money to have projects.”

“I had come with questions because of previous money and where it went,” Miller said, adding that there are lower-income areas like Murchison Road and Yadkin Road that never seem to receive city funding while places in north Fayetteville and along Ramsey Street always seem to get the financial assistance needed to improve their corridors.

“I need more proof of where that money is going,” Miller said. “Before it’s passed, let people know what they’re going to do with it and get it approved by the public.”

The estimated savings over other financing options would be about $2.5 million, the city has said.

The city has scheduled other sessions where voters can learn more about the three bond packages. Residents may attend any of the meetings. The remaining sessions are scheduled for:

Any additional sessions that are scheduled will be listed at FayettevilleNC.gov/BOND.