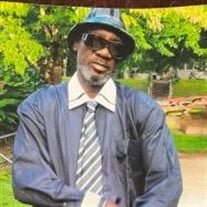 To send flowers or a memorial gift to the family of Mr. Donald Raymond McLaurin Sr. please visit our Sympathy Store.