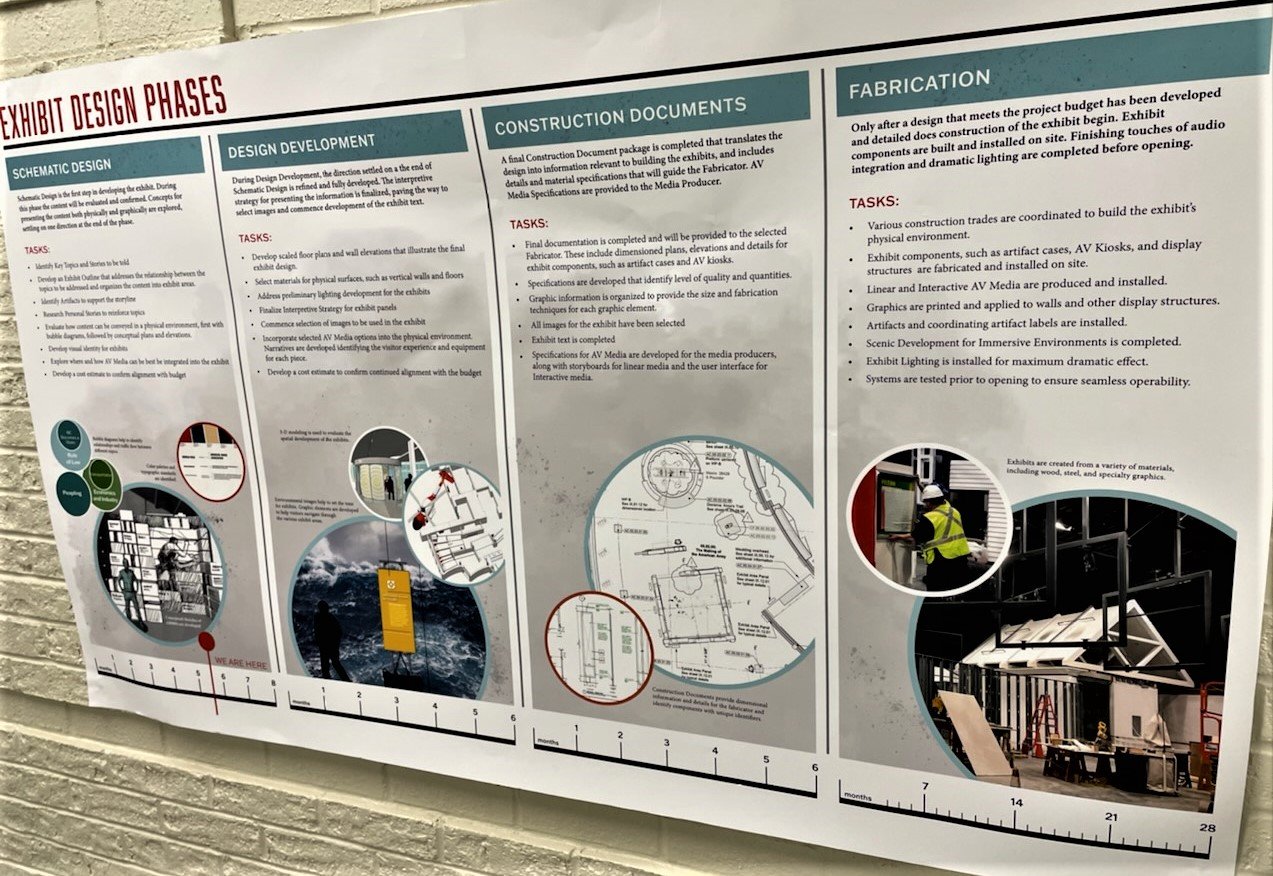 Panels show proposed content in exhibits for the N.C. History Center on the Civil War, Emancipation and Reconstruction at a public forum Monday at Mount Sinai Missionary Baptist Church.
Photo by Michael Futch 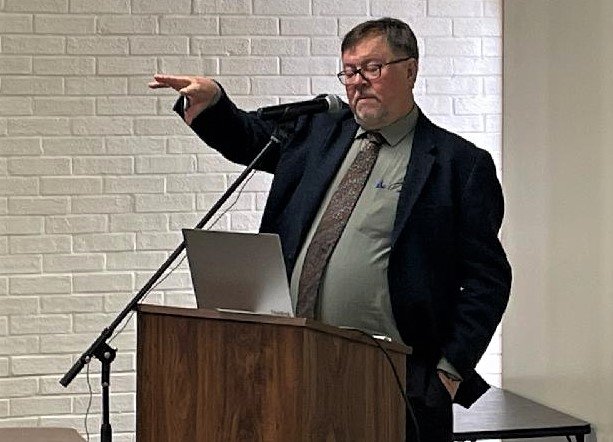 Exhibit designer Gerard Eisterhold speaks at a forum to gather feedback on the N.C. History Center on the Civil War, Emancipation and Reconstruction on Monday at Mount Sinai Missionary Baptist Church.
Photo by Michael Futch 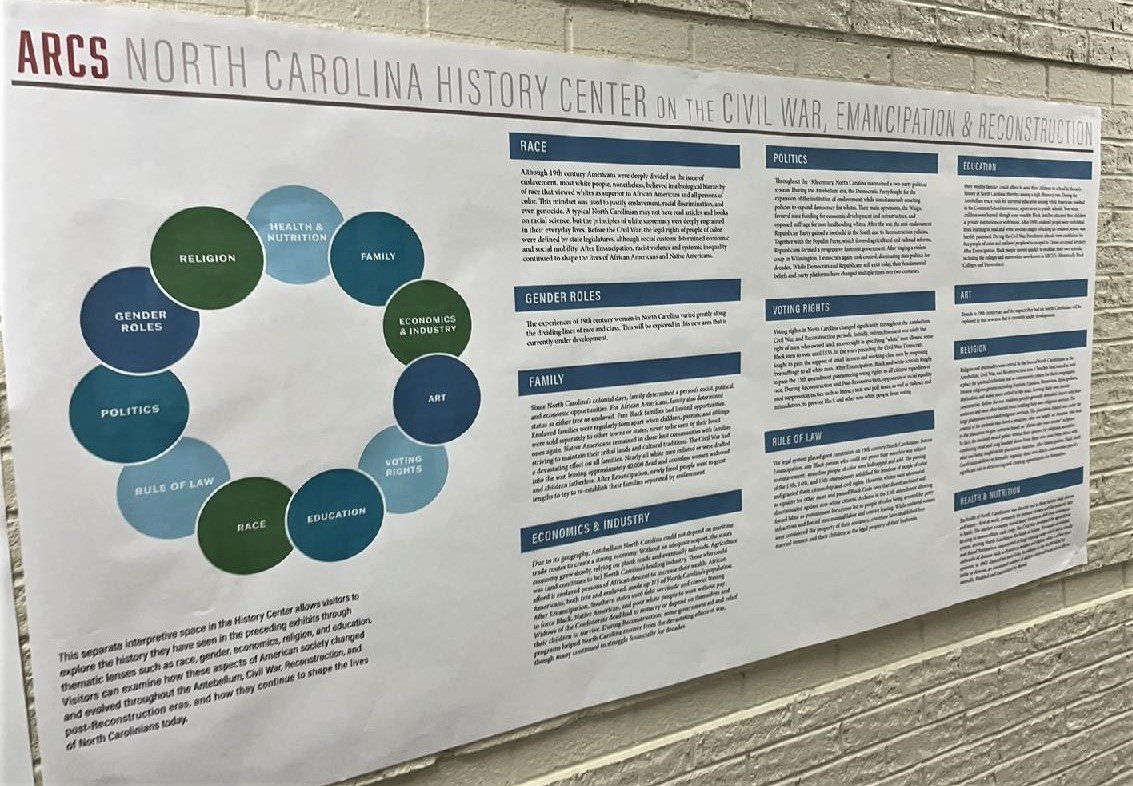 I made it my business to come to one of these ’cause I wanted to hear. I wanted to be fair., I’m happy to see some of these things I’ve seen around the room because it speaks to the mechanics of the center.”
Vikki Andrews, speaking at a public forum Monday
By Michael Futch | Staff writer

A lack of participation from the Black and Native American communities in planning for a Civil War history center sparked a discussion during a forum on the contents of its exhibits.

The forum was held Monday morning by organizers of the $80 million N.C. History Center on the Civil War, Emancipation & Reconstruction.

Vikki Andrews of Fayetteville said she was vehemently opposed to the history center when she first heard about it.

Andrews, who is Black, said Monday’s forum provided her with additional insight on the center, which has received a lot of criticism among some city residents.

“Because I had heard lots of rumors,” Andrews said.

“I made it my business to come to one of these ’cause I wanted to hear. I wanted to be fair,” said Andrews. “I’m happy to see some of these things I’ve seen around the room because it speaks to the mechanics of the center.”

The forum was held in the multipurpose room at Mount Sinai Missionary Baptist Church, 1217 Murchison Road.

Panels outlining the content proposed for the history center were displayed on the wall at the church. A second forum was held Monday evening. The panels will be on display from 10 a.m. to 5 p.m. through Friday at the church to gather written feedback from the public.

“I said in the meeting, my concern is not necessarily with the mechanics, but who gets to decide the stories that are told,” Andrews said. “Everybody is not going to make that extra effort to find the information and what stories they get.

“Who gets to decide?” Andrews asked. “For me, that’s a concern. There’s an effort in this country … an effort to change the past and make it more comfortable. There’s that effort there. When I hear that — when the architects and people in charge say some of the stories are difficult, and we may have to make some decisions — that says to me that’s a problem. We have to make that extra effort."

The conversation about opposition to the project in some communities started when former Fayetteville State University Chancellor James Anderson noted that American Indian stories are proving hard to gather.

“It’s very difficult,” Anderson said. “All our local historians have made a tremendous effort. It’s hard, for example, to get Native American. American Indian stories.”

Anderson said he is working with Chancellor Robin Gary Cummings of the University of North Carolina at Pembroke to get first-person stories about Native Americans in history.

“It’s just difficult,” he said. “There have been some politics involved in this evolution that we’re trying to overcome, I guess we can say it. And the politics are things that sometimes slow things up. And we’ve done a tremendous effort to try to overcome those politics.”

Spencer Crew, the first African American director of the Smithsonian Museum of American History and a professor at George Mason University, said the center’s staff is talking to people in the community and gathering information.

Cheri Molter, an author and research historian with the N.C. History Center, noted that the museum has acquired about 300 stories that are “exhibit worthy.”

Molter was asked whether the center will offer an opportunity for Blacks to research their family history.

“We know there’s been a lot of inequity in genealogical research,” Ann Ashford said.

Molter said she has been gathering stories across the state since 2018.

“All of them have value,” she said.

She said in some communities, journals, diaries and letters have vanished.

“So, what we’ve been doing is, we’ve been working to fill in the gaps whenever possible when someone wanted to share information with me,” she said.

As he was leaving the church, former FSU Chancellor Anderson said he has taken heat for his support of the proposed center. He said he wants to make sure that people include the role of education,  noting that Fayetteville State was founded in 1867.

“So, it’s overlapping this discussion,” he said of the Civil War and its aftermath. “Making sure that we do not lose sight of the fact that secondary education, higher education — we’re the second-oldest state institution and (the University North Carolina at) Chapel Hill is the oldest. They’re very different in how Fayetteville State contributed to the development of this narrative vs. Chapel Hill. I hope that it’s reflected somewhere.”