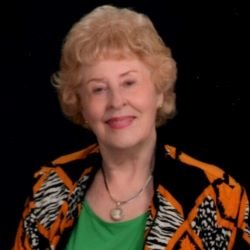 We have lost another member of America’s “Greatest Generation”.  Regina M. Smith has gone to be with the Lord at age 99.  She loved God, country, family and friends.  In fact, those who knew her would say her gift to us all, was love.

Born in Loving, GA, Regina left home for Atlanta at age 18 to go to Beauty school.  She met and married her US Army husband of 60 years in 1944.  As he left for war, she joined the war effort herself by working at the Oak Ridge Research facility until the end of the war.  After that, she lived the life of most military wives of the time, following her husband from base to base, working (in cosmetology), and raising two boys, often on her own while her husband was deployed.  In 1962, when they were stationed at Fort Bragg for a second time, they settled in Fayetteville where she and her family joined First Baptist Church.  Regina remained a faithful member of the church for the rest of her life.

Her greatest joy in life was her family.  Her favorite time of the year was the holiday season of Thanksgiving and Christmas, and it seemed she prepared all year for the feasts that (over) served her family and any friends that would stop by.  Her greatest disappointment (other than having to give up driving) was when she realized she couldn’t prepare those feasts anymore.

The funeral will be conducted on Monday, December 5, 2022, at 11am in First Baptist Church by the Rev. Bob James and the Rev. Ed Beddingfield.  The family will receive friends at the church from 10 to 11 am before the service.  Burial will be private at a later date in Sandhills State Veterans Cemetery in Ft. Bragg.

The oldest of seven children, Regina survived the longest.  In addition to her siblings, she was preceded in death by her husband, Marvin O. Smith and her oldest son, Marvin, Jr.

Online condolences may be sent to www.jerniganwarren.com