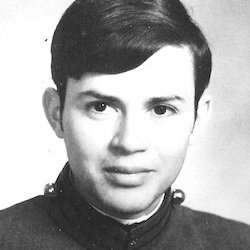 Dennis was born in Pueblo, Colorado on March 1, 1954, son to the late Jose Trujillo and Stella Garcia Trujillo. He attended Centennial High School in Pueblo and excelled in track and field winning back-to-back state mile titles as one of the great moments in Pueblo sports history. For many high school runners, state titles are the highlight of their careers, especially after winning four of them, but for Trujillo that was only beginning. He went on to earn 10 varsity letters at West Point (cross country and track combined). Trujillo was a two-time NCAA Division I all-American, earning two citations in 1975 Ñ he was sixth in the two-mile NCAA indoor championships and fifth in the three-mile at the NCAA outdoor championships (the second-best American). Trujillo's West Point teammates named him cross country team captain in the fall of 1975. He won two Ivy League outdoor track titles, the 5,000 in 1975 (13:40.8) and the 10,000 in 1976 (29:36.0). Even now, more than 30 years after he graduated from West Point, Trujillo ranks fifth all-time on the school's list at the 5,000-meters. He graduated as the Academy and Field House two-mile indoor record holder and was West Point's cross country course record holder. Trujillo won two major cross country races in 1974 while at West Point, the Heptagonal and the IC4A title (only the second cadet to do so). Trujillo finished his collegiate running career with personal bests of 4:07 in the mile and 8:47 in the two-mile. In 1980, he qualified for the Olympic Marathon trials, running a 2:21 at the Dallas White Rock Marathon (only his second marathon). That, as it turned out, was Trujillo's last race. He was unable to compete in the trials because of his deployment to Korea with the Army.

Professionally, Trujillo graduated from West Point with an engineering degree and spent the first 10 years of his military career as an infantry line officer, serving at Fort Hood Texas; Fort Bragg, N.C.; Fort Leavenworth, Kan; and Fort Benning, Ga. His overseas assignments included Germany, Panama and Korea. Trujillo spent another decade as an area expert, with a specialty area of East Asia. In that role he handled political and military issues, such as negotiations between the Army and the South Korean government.

Trujillo retired from the Army in 1996. During his two decades in the service, he rose to the rank of lieutenant colonel. Upon retirement, he earned his master's degree in math and then enjoyed a second career as a math teacher. Trujillo's first job was teaching Native American students at the Chief Leschi School in Puyallup, Wash. Since 1999 he taught at the Indianhead School in South Korea, an international school where expatriate parents from various countries send their children.

Services to honor LTC Trujillo life will be scheduled at a later date.