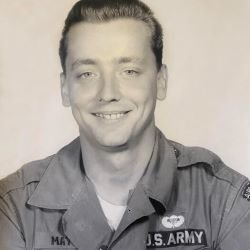 SFC Joseph Christopher Matyga (US Army Retired), 84, died on Thursday, 27 October 2022 at Cape Fear Valley Medical Center. Joe was born 1 November 1937 in Chicago, Illinois, son to the late Joseph Francis Matyga and Stella Pawelska Matyga. After being raised in the St. Hedwigs Orphanage on the North Side of Chicago; Mr. Matyga enlisted in the United States Army in September 1955.

SFC Matyga served with the utmost dignity and honor for more than 20 years. While serving he was stationed at Fort Bragg, NC, however he would also serve in Vietnam, as well as Germany. He performed duties as an Administrative Specialist and Radio Operator in XVIII Airborne Corps Repl Det FORSCOM. In 1959 SFC Matyga attended the Army Language School located in Monterey, California. It was here, then Army Spec 4 and Green Beret Joe Matyga met a life long friend and brother, Communication Technician Officer Third Class Jim Semelroth of the US Navy. The two formed a bond that nothing would ever separate and they still remain friends today.

Along with his father and mother, he was preceded in death by his sister, Jacqueline Tompkins.

To send flowers to the family or plant a tree in memory of SFC Joseph Christopher Matyga (Ret.), please visit our floral store.