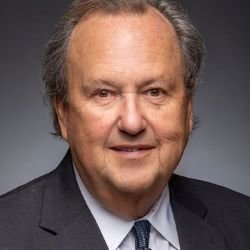 Robert Glenn Ray, 79, passed away Thursday at his home surrounded by family.

He was born April 9, 1943 in Portsmouth, V.A., to Mary Irene  Wheless and Carl Nicholas Ray of Franklin County, N.C., and grew up on a farm outside of Bunn. As a teenager, he developed a love of rock and roll music and enjoyed attending concerts with friends and family.

He received a B.S. from the University of North Carolina at Chapel Hill in 1965, and his Juris Doctorate in 1968 from the UNC School of Law. Always faithful to his alma mater, he attended basketball games throughout his life.

While attending law school, he met Sylvia Long Gooding, who would become the love of his life. They were married June 22, 1968, in Kenansville, N.C., and began a life together that would last until her death in November of 2020.

Bob and Sylvia moved to New York in 1968, where he worked while getting his Masters of Law degree in Taxation from New York University. The years they spent in New York inspired a lifetime love of the city and they traveled there often. They returned to North Carolina in 1972, briefly residing in Charlotte before making their home in Fayetteville where he began practicing law with Charles Rose II, Herb Thorp and Anthony Rand, among others. Bob and Sylvia quickly made many friends throughout the community. He filled his tax advisory law practice and became highly regarded in the professional community.  In 2009 he founded the Ray Law Firm PLLC where he continued to practice until his death.

Known for his impeccable good manners and welcoming ways, Bob believed strongly in giving back to his community and devoted his time to many organizations including the Cumberland Community Foundation, Cape Fear Botanical Garden, Cape Fear Regional Theatre, the Fayetteville Symphony and the Exchange Club of Greater Fayetteville. He was chairman of the Cumberland County Public Library building fund campaign and was instrumental in construction of the downtown library. He was a devout supporter of Sylvia’s work as founder of the Women’s Center of Fayetteville, today known as the Center for Economic Empowerment & Development. Bob and Sylvia were extremely active in their beloved hometown and helped improve the lives of many.

Bob was well known for his flower garden and devoted countless hours to perfecting its beauty. He was a connoisseur of fine food and home cooking and enjoyed the company of his close friends in the Gourmet Club. He was known to love fried banana sandwiches as much as Elvis in his early years.

Bob loved to travel and in January attained a lifelong dream to visit all seven continents when he set foot on Antarctica. He planned many fabulous trips for friends and family, affectionately known as “Bob's Tours.”

The family invites all to a visitation at his home from 1 p.m. to 4 p.m. Sunday. In lieu of flowers, donations can be made to any of the many organizations he supported  - the Cumberland Community Foundation, Cape Fear Botanical Garden, Cape Fear Regional Theatre, the Center for Economic Empowerment & Development and the Fayetteville Symphony Orchestra.

To send flowers to the family or plant a tree in memory of Robert Glenn Ray, please visit our floral store.

Board of Education approves retention bonuses for eligible teachers, staff