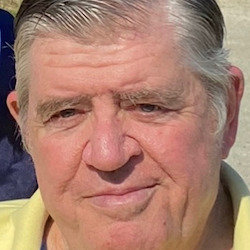 Samuel Pittman Guy II, 76, went home to be with his Lord and Savior on Thursday, December 1, 2022. He was born and raised in Fayetteville and a 1965 graduate of Seventy-First School.  From an early age, he was an avid outdoorsman which led him to becoming an Eagle Scout during high school. After graduation he served his country in the National Guard while attending Methodist University and earning his Master’s Degree in English. He then went on to pursue and receive a second Master’s Degree in School Administration from East Carolina University.

Samuel devoted his life to God, family, and educating children. He served as an administrator, teacher, and coach for over 53 years in both Cumberland County Schools and then his family’s privately-owned Guys Schools, Inc. He was a teacher to each of his grandchildren and loved, so much, watching them grow. He also enjoyed hunting, Hardee’s coffee, and a good conversation that often began with, “Now let me tell you what’s the truth.”

Samuel is preceded in death by his parents, Margaret Griffin Guy and Neill Pittman Guy, his mother-in-law Ruby Nichols Fowler, and his wife, Jean Fowler Guy and his daughter-in-law Deanna Guy all of Fayetteville. He is survived by his sons, Neill Pittman Guy II and Samuel Pittman Guy III and his wife Jenn, and his daughter Jennifer Guy; seven grandchildren, Taylor Lambert, her husband Wilson, Chandler, Jackson, Kaleigh, Parker, Avery, and Easton, and one great grandchild, Blake, all of Fayetteville.

In lieu of flowers, memorials may be made to Highland Presbyterian Church Youth Ministries.

To order memorial trees or send flowers to the family in memory of Samuel Pittman Guy, II., please visit our flower store.