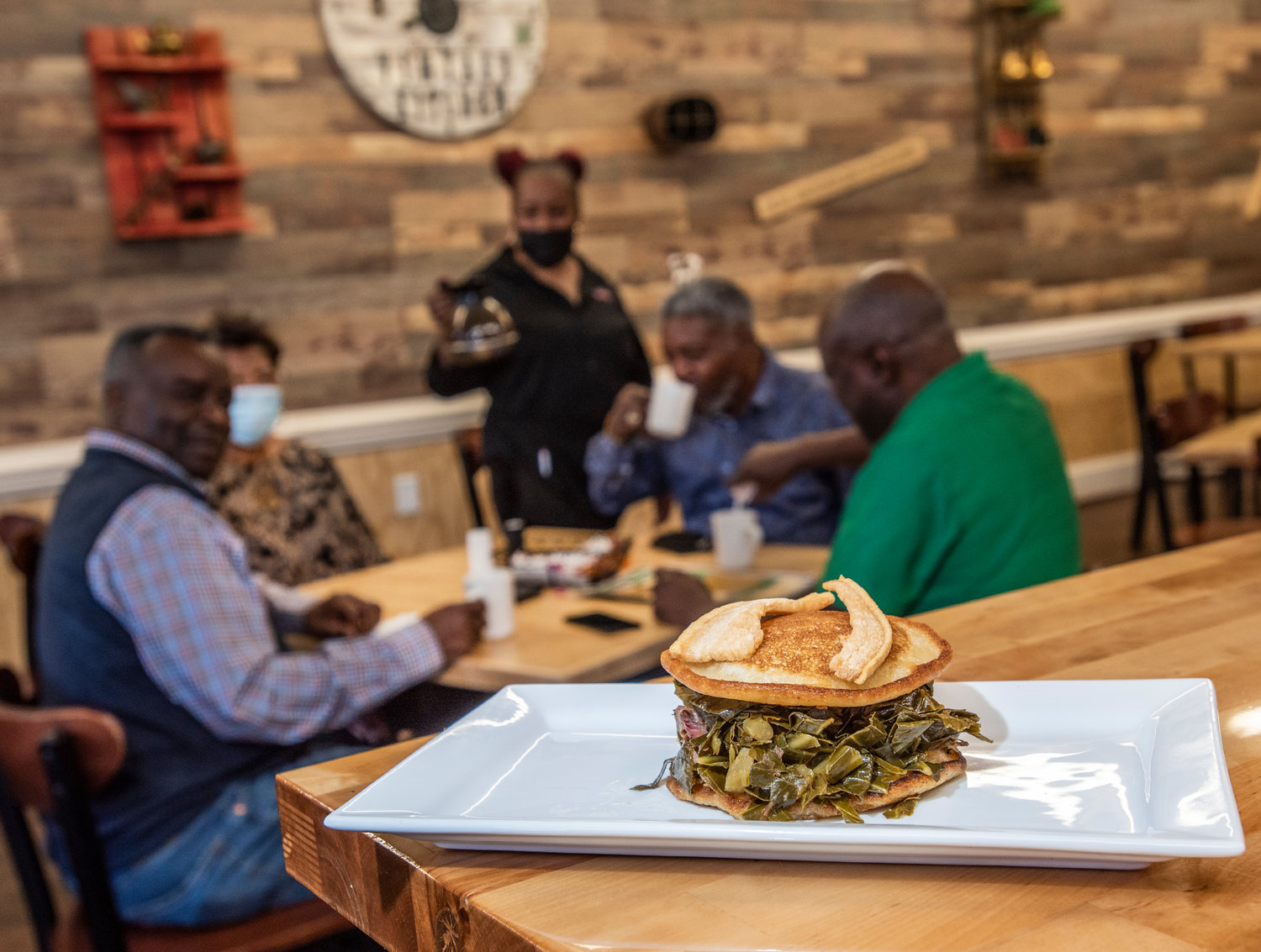 The collard sandwich is a work of Southern culinary art. The greens, flavored with smoked turkey, are flanked by corn fritters and topped with fatback. Served with fries, the order comes to $6.59.
Cindy Burnham 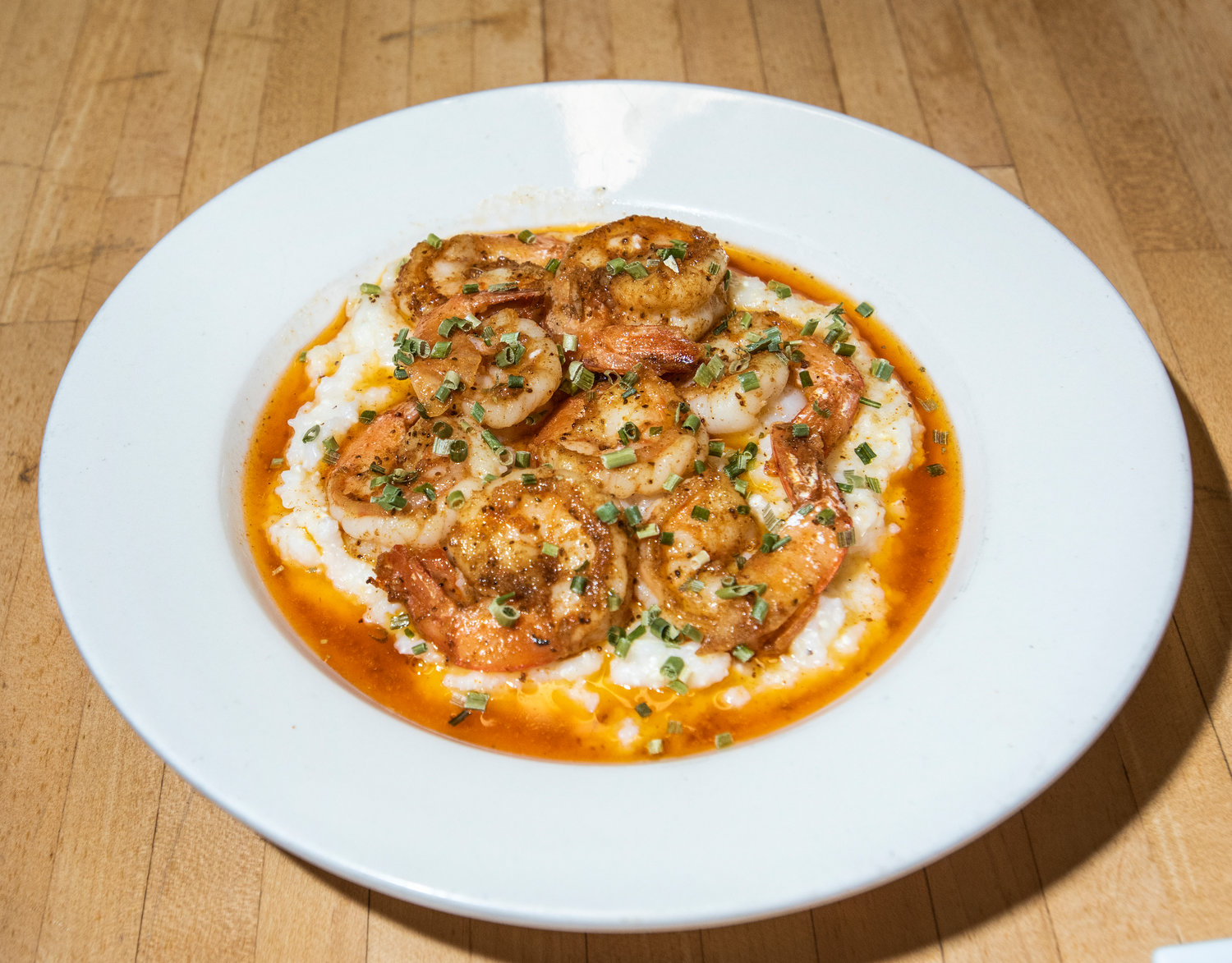 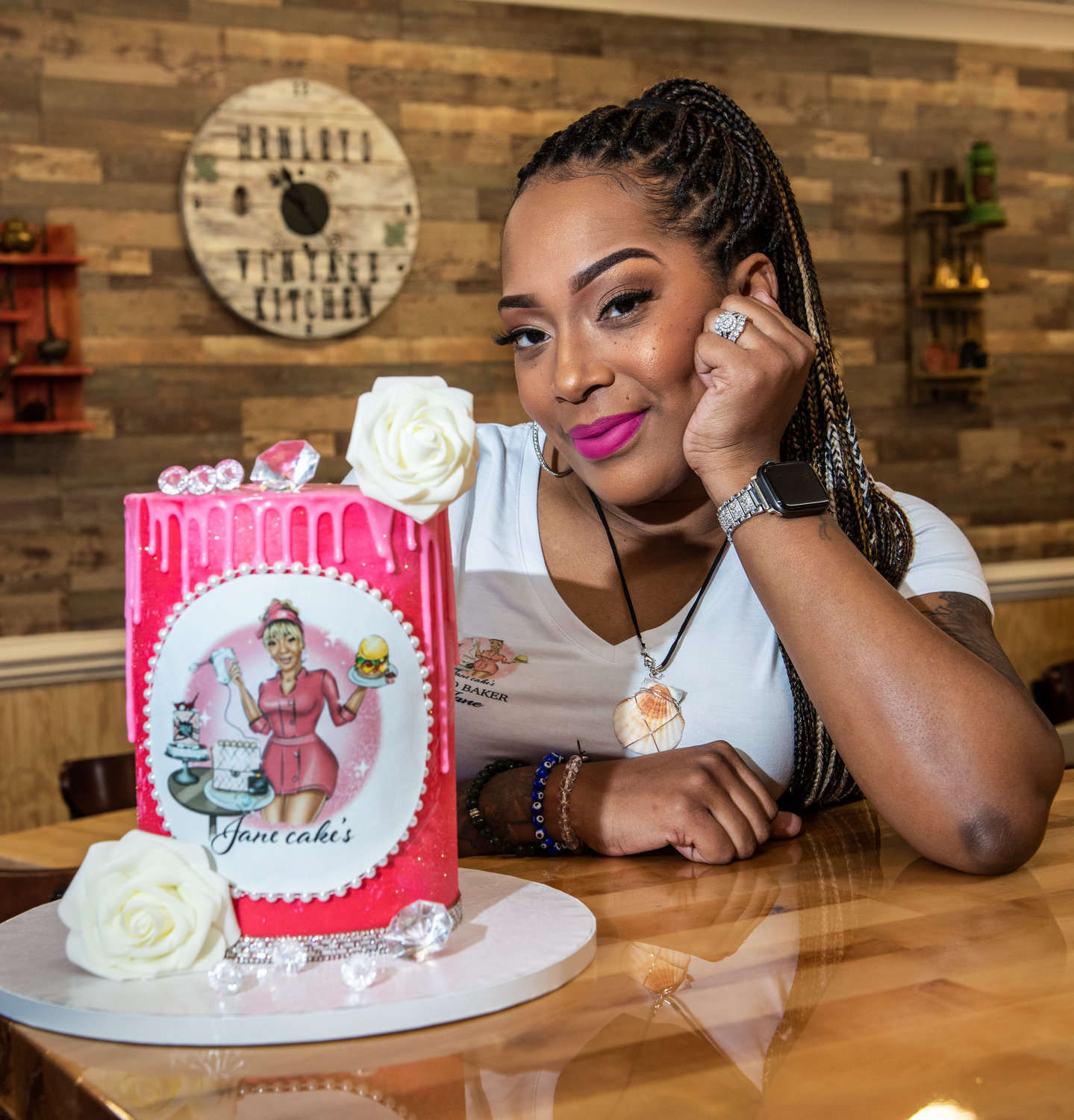 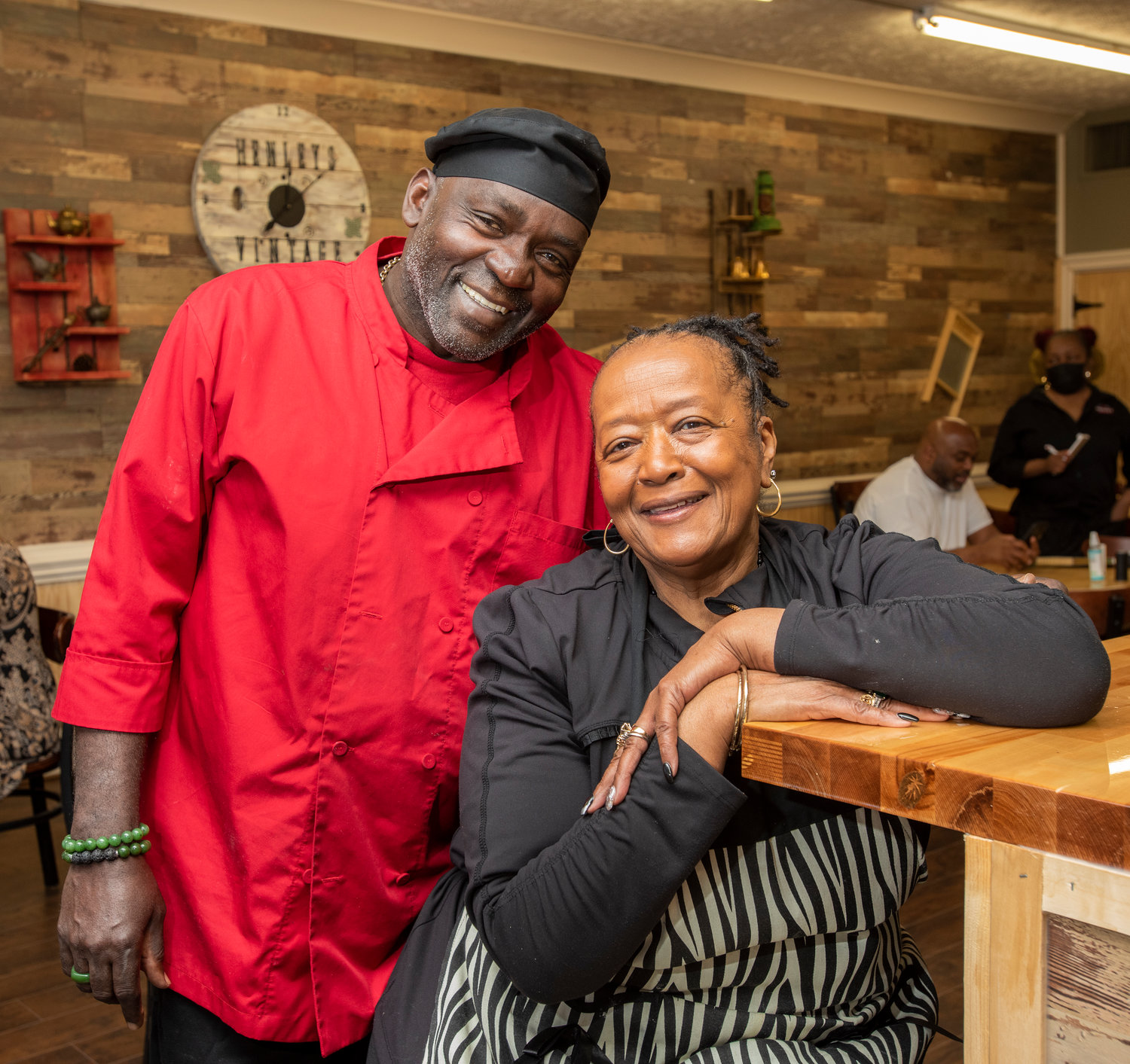 "It’s been a while since Murchison Road had a soul food restaurant,” says Michael Henley, after cooking up yet another big pot of collard greens for the lunchtime crowd.

Now he’s working the dining room, chatting up a table of his minister brothers who favor the fried catfish with grits, salmon croquettes, hamburger steak and chitterlings, or chitlins, if you will.

Serving breakfast, lunch and dinner Tuesday through Saturday – and Sunday brunch, too, for the after-church crowds – Henley’s Vintage Kitchen, near Fayetteville State University, has been feeding the masses since opening its doors in September 2021.

Henley and his wife, Marilyn, will tell you that a series of small miracles and divine signs led them to purchase the building in need of many cosmetic improvements. Some years ago, the location was Newman’s, which served sandwiches and a few Southern dishes, and before that, Smitty’s, a bar and grill. A grant from the city helped them fulfill a desire to be part of the revitalization of the Murchison Road corridor, Michael says.

It took about nine months of repairs and enhancements, but they were finally able to open the 40-seat restaurant in the middle of a pandemic. While they are seasoned business owners, they have no previous restaurant experience. Just a love of cooking and people.

“This is our ministry,” says Michael, an FSU business school alum who also owns the concrete company a stone’s throw away. “People come in here and see a changed man,” he adds.

Michael is upfront about past troubles with drugs. He says he’s been able to counsel some of his customers. He’s been there and can recognize when something is off.

Marilyn is also compassionate in her walk. Originally from New York, she met Michael in 1988 at a party. He won her over with his cooking. She formerly owned successful child-care centers in Fayetteville and St. Pauls. Marilyn says working in the restaurant has reminded her of the biblical “judge not,” as was the recent case of a woman who works the streets and ended up sharing her story with Marilyn.

“You never know what someone has been through,” Marilyn says, as she wipes down tables, makes sure folks’ orders of neck bones over rice and dark brown gravy are done just right, and visits with a lady dining solo. Marilyn listens intently and encourages the woman, who is battling cancer, and makes sure the shrimp and grits in a Cajun butter sauce are to her liking.
Between the bustling dining room and to-go orders being expedited by the Henleys’ daughter, Shanecia Taylor, the place is hopping with joy and all forms of humanity.

“We want to make sure that people are not strangers when they leave and it feels like home to them,” Shanecia says.

Even at 2 p.m. on a Tuesday, the parking lot is packed with Mercedes, Beamers, SUVs and pickups. An outdoor dining patio is taking shape, just in time for spring. Local business leaders walk in, along with college students, soldiers in fatigues and several clergymen who get seated at a long table. They may not be solving the problems of the world, but one is talking in spirited tones while the others listen intently, which only adds to the feeling of community within these four walls.

The dining room is minimally rustic with wood touches, centerpieces of cotton picked from local fields that’s been tucked into glass carafes, and antiques discovered by the Henleys, including a vintage Victrola in one corner. Sweet tea and lemonade are sipped from Mason jars.

The couple, who cook and also have a kitchen staff, take pride in the made-to-order, lip-smacking, hand-clapping good food – from old-fashioned eggs and biscuits for breakfast to the well-seasoned oxtails, rack of ribs, fried chicken wings and more at lunch and dinner. Cornbread or a yeast roll sop up every sweet drop that may be left on your plate. Also noteworthy are the sides, including sweet potatoes in a brown sugar-laced and buttery sauce, perfectly fried okra and wonderful potato salad. Most entrees are about $9 to $14.

The collard sandwich is a work of Southern culinary art. The greens, flavored with smoked turkey, are flanked by cornbread fritters and topped with fatback. Served with fries, the order comes to $6.59.

Be sure to save room for dessert. Even if you’re not a “cake person,” a slice of heaven awaits with creations from Jane Cakes and Things. Best-sellers, at $3.99 each, are strawberry crunch, cookie butter, chocolate chip, honey bun and banana pudding cake.

Marilyn said she had a feeling about Jane Smith, who cold-called her one day, bearing samples of her cakes. “She gave me a chance. I am grateful,” says Jane, a military wife and mom to three young daughters.

“She looked into my soul and said, ‘You’re gonna be good, lady,” Jane adds about the gift of meeting Marilyn Henley. And then she took a leap of faith on Jane.