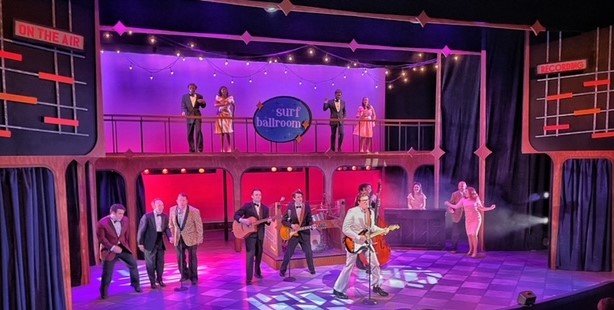 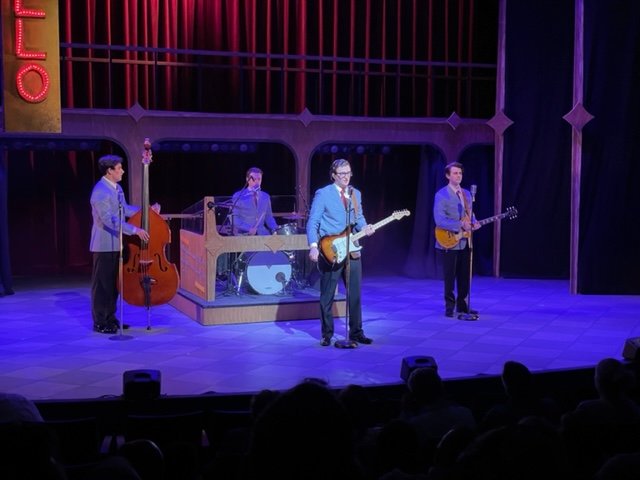 'Buddy: The Buddy Holly Story' runs through Oct. 9 at Cape Fear Regional Theatre. There are 26 musical numbers evenly split between Act One and Act Two.
Photo by Jason Brady
Previous Next
Posted Friday, September 30, 2022 10:33 am
By Jason Brady

In 1971 Don McLean in his song “American Pie’’ refers to a tragic loss to the rock and roll culture when he sings the lyrics, “the day the music died.”

McLean was referring to Feb. 3, 1959, when four promising rock and roll stars plummeted to earth in their four-seat Beechcraft Bonanza airplane. The plane’s passengers were en route from Clear Lake, Iowa, to Moorhead, Minnesota, the next venue of their Winter Dance Party tour.

Among those who died was 22-year-old Buddy Holly, to whom McLean dedicated “American Pie,’’ and who he believed was one of the most influential rock and roll musicians both during and after his short life.

Others who died in the crash were teen idol and teenager himself Ritchie Valens, whose song “La Bamba’’ catapulted him into brief stardom, and J.P. Richards, the Big Bopper, whose big hit was “Chantilly Lace.’’

The short life of Buddy Holly is currently being told by a troupe of fantastic actors at Cape Fear Regional Theatre. “Buddy: The Buddy Holly Story’’ runs through Oct. 9. I believe it to be among the best performances I’ve experienced in many years. The renovated seating, spacious and comfortable complete with a cup holder, added to the enjoyment.

The story follows Charles Hardin Holley of Lubbock, Texas, from his early years as a country and western musician to a short-lived rock and roll icon.

It follows Holly and his band to Clovis, New Mexico, where they recorded “That’ll Be the Day,” the first of many hits for Holly and his band, the Crickets. In 1957, it topped the U.S. and UK singles charts. “Peggy Sue” was their next big hit.

Throughout the performance, the music was great, especially for those who grew up listening to Buddy Holly. Tunes like “Peggy Sue,’’ “Why Do Fools Fall In Love’’ and “Johnny Be Good’’ are just a few of Oldie Goldie favorites. And you can’t go wrong with Valens’ “La Bamba,’’ and the Big Bopper’s “Chantilly Lace.’’

In all, there are 26 well-done musical numbers evenly split between Act One and Act Two. Not all the numbers were Buddy Holly’s. Ayana Washington, portraying Micki Williams at the Apollo, belted out the Isley Brothers song “Shout” to a standing ovation.

Keaton Eckhoff portrays Buddy Holly. He captured Holly’s persona dead on and wore the iconic Steve Allen horn-rimmed glasses like he was born with them. His transition from early innocent Holly to the later savvy Holly is done well. Eckhoff’s physical likeness to Holly is uncanny.

Mimicking Holly’s vocal hiccups and altering between regular and falsetto voice added an eerie realism to the musical numbers. It was like hearing him on Ed Sullivan all over again.

The audience ranged from Boomers to Zoomers, and the music brought many in the audience into play. There was a lot of toe-tapping, shoulder swaying and clapping to the rhythm of the songs performed to perfection. A young woman next to me thoroughly enjoyed herself while dancing in her seat. Apparently, Holly’s music transcends all ages.

The scenery and props were simple but worked and allowed scenes to be changed quickly. The costumes were classic 1950s country and western, and Ivey League. The lighting made it all come alive. The cast was high-energy throughout the show, and I wondered how they could sustain that pace. But they did, to the very end.

“The Buddy Holly Story,’’ written for the stage by Alan Janes, touches on the dramatic and the comedic. It also does not shy away from social issues. Many white-owned radio stations in the late 1940s and early 1950s refused to play rock and roll because of its African-American heritage of rhythmic blues, gospel, and jazz.

In one scene, Holly and his band played in the Apollo Theater. The scene was both funny and yet brought a dose of reality regarding race relations in 1950s Harlem. In another scene, Holly calls his mother in Lubbock to tell her he had gotten married after a five-hour romance. Apparently, his mother disapproved of her youngest son marrying Maria Elena Santiago, artfully played by Salina Renee.

Holly, like Elvis Presley, broke tradition and gambled his career on a desire to play his “kind of music.” Holly influenced many future rock bands. The Beatles studied his style and named their band the Beatles, a homage to the Crickets; the Hollies, who formed in 1962, named their band in honor of Holly.

See the “Buddy Holly Story’’ at Cape Fear Regional Theatre. The show is both enlightening and entertaining. I give it two thumbs up.