One half of conservative duo Diamond and Silk remembered with love 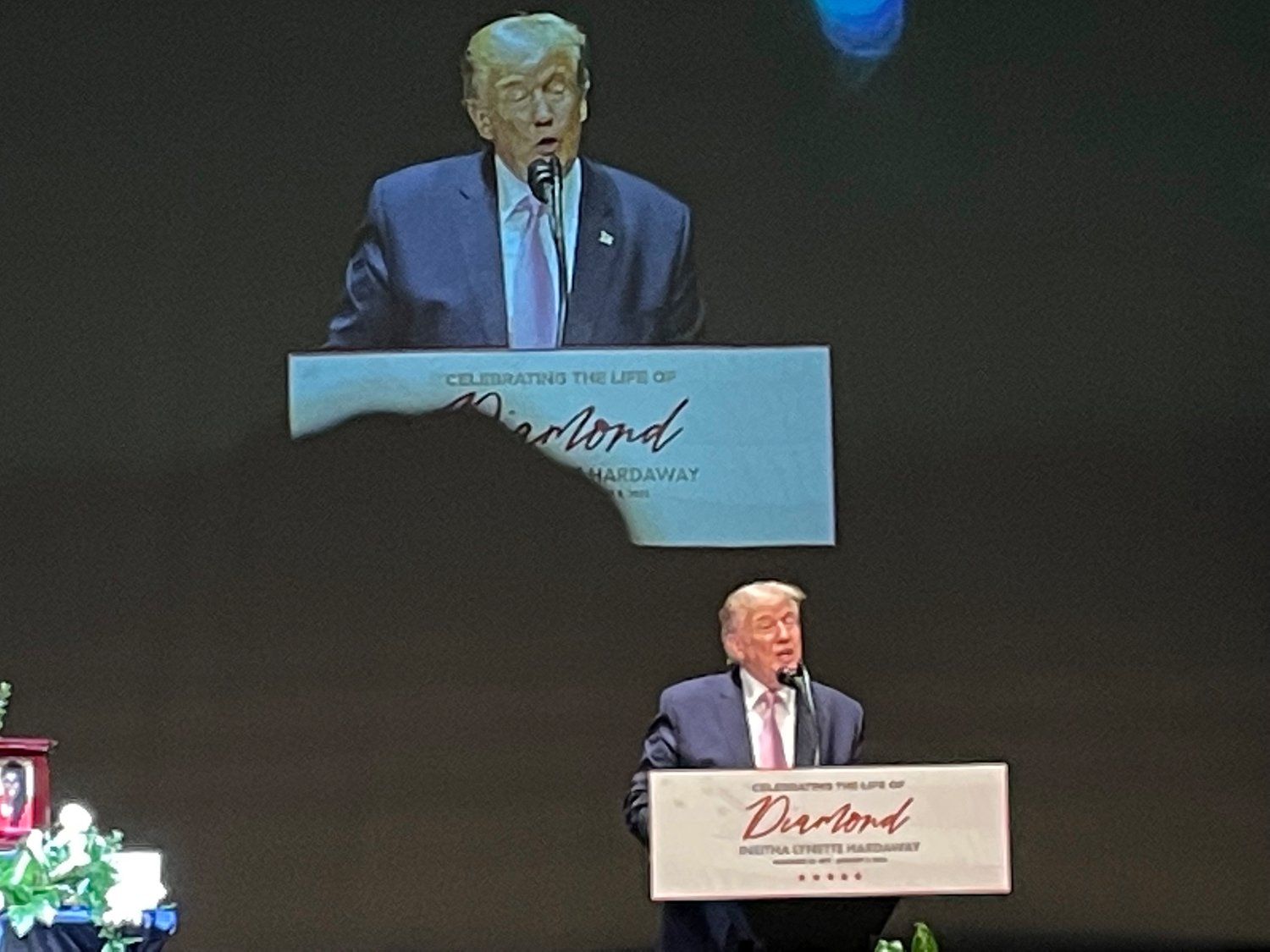 Former President Donald Trump speaks of his gratitude for the late Lynette Hardaway during a celebration of life service Saturday at the Crown Theatre. Hardaway teamed with her sister Rochelle Richardson as social-media and cable-TV commentators Diamond and Silk.
Photo by Michael Futch 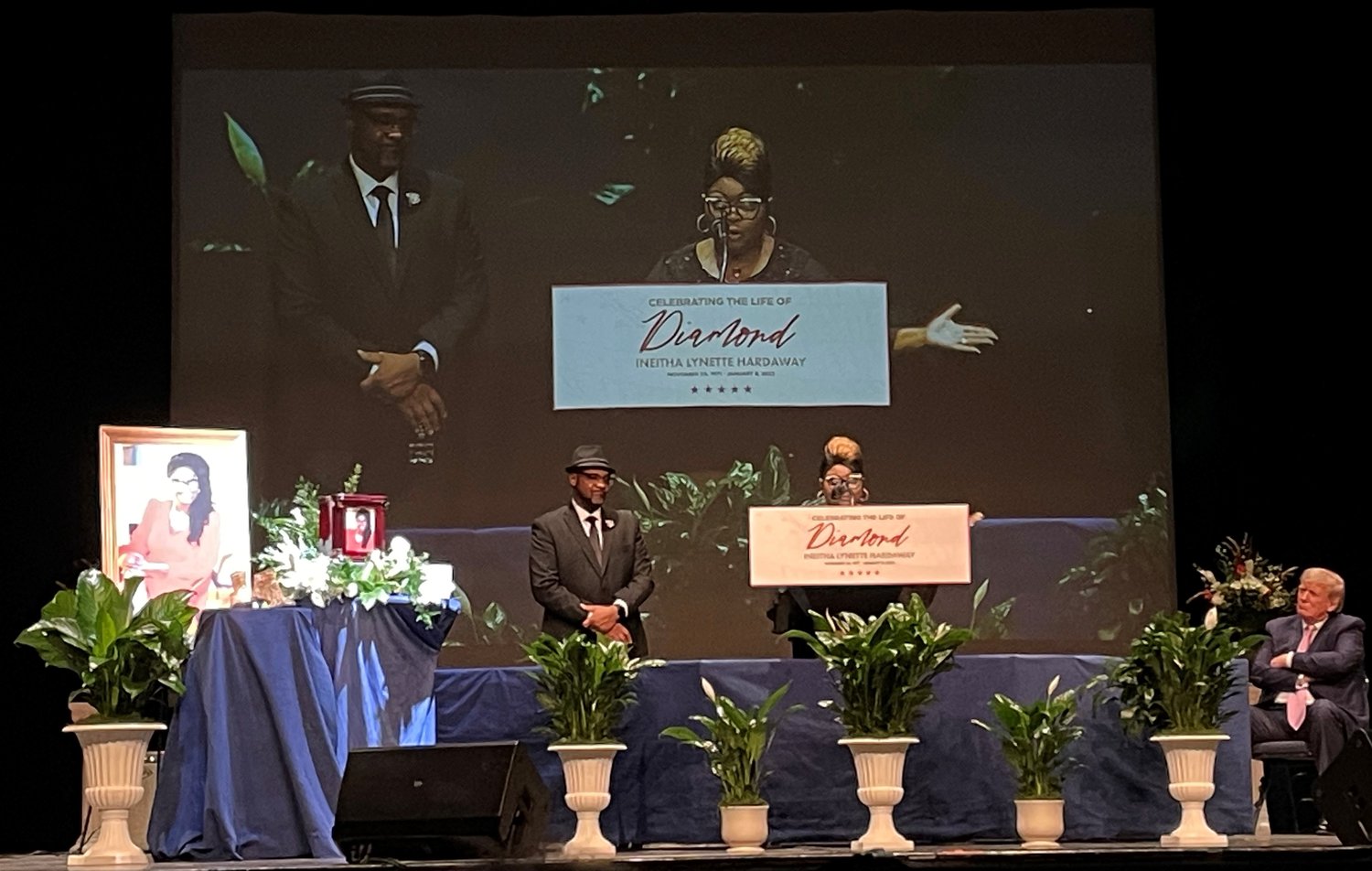 Former President Donald Trump, right, listens to Silk, Rochelle Richardson, during a celebration of life service for Lynette Diamond Hardaway on Saturday at the Crown Theatre.
Photo by Michael Futch 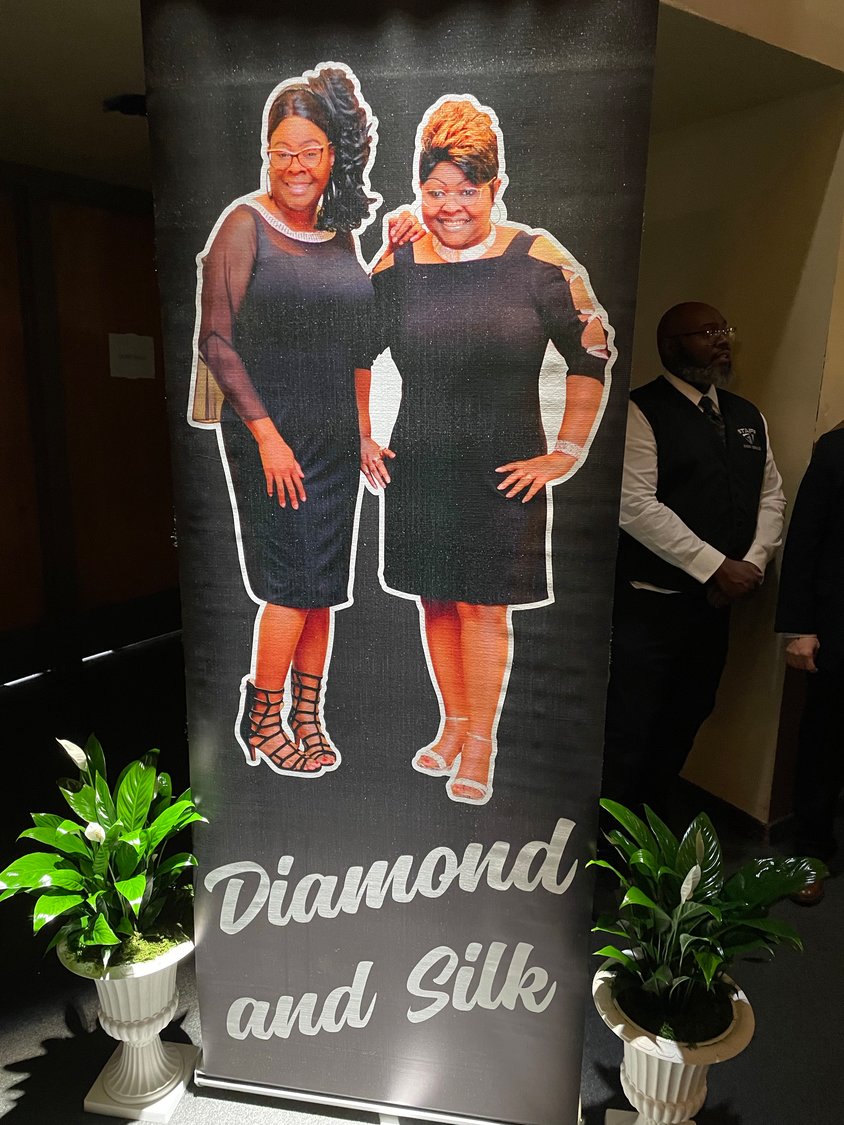 A poster on display at the service for Lynette Diamond Hardaway on Saturday at the Crown Theatre.
Photo by Michael Futch 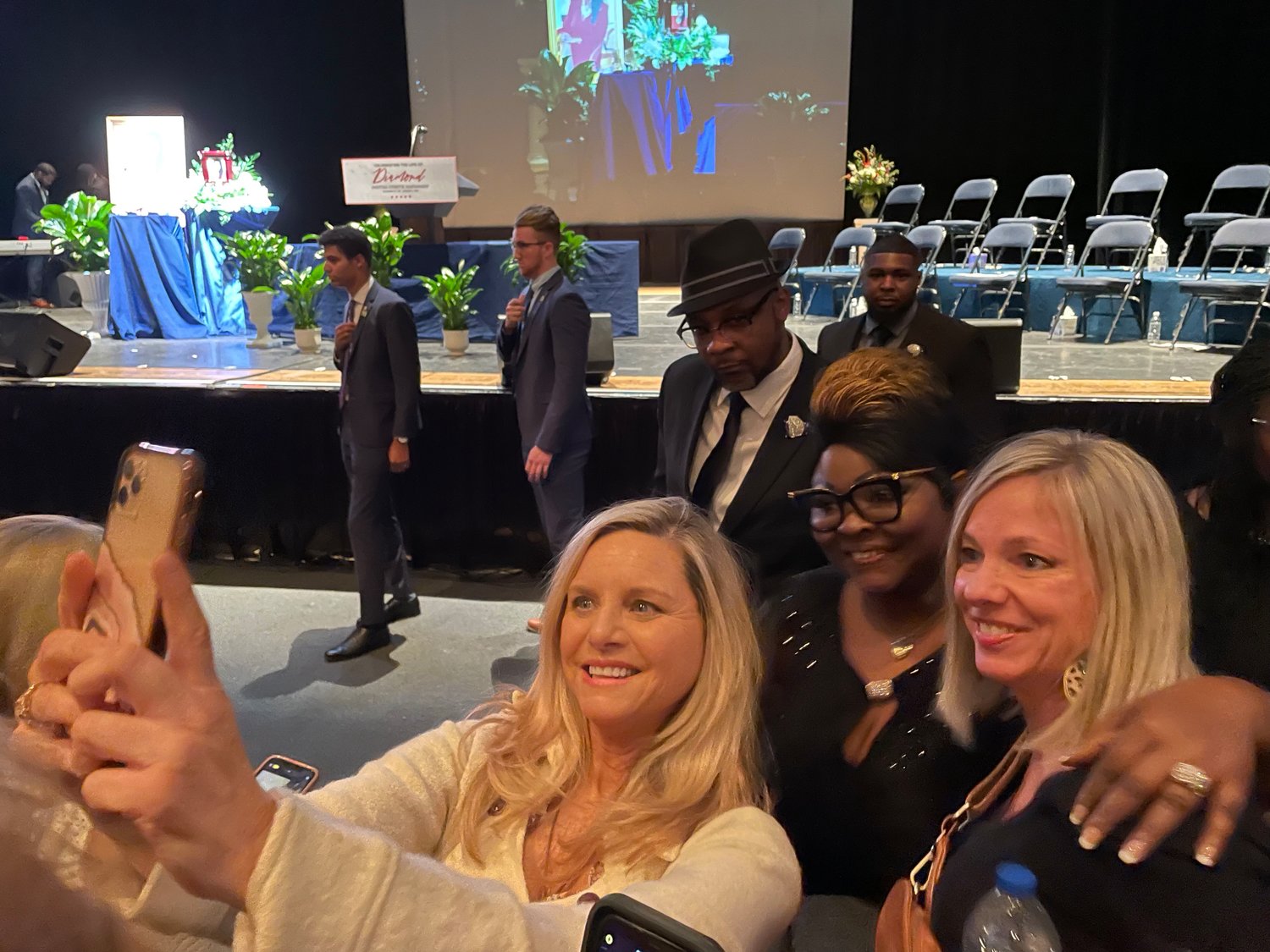 Silk, center, takes a photo with fans during the service for Diamond Hardaway on Saturday at the Crown Theatre.
Photo by Michael Futch 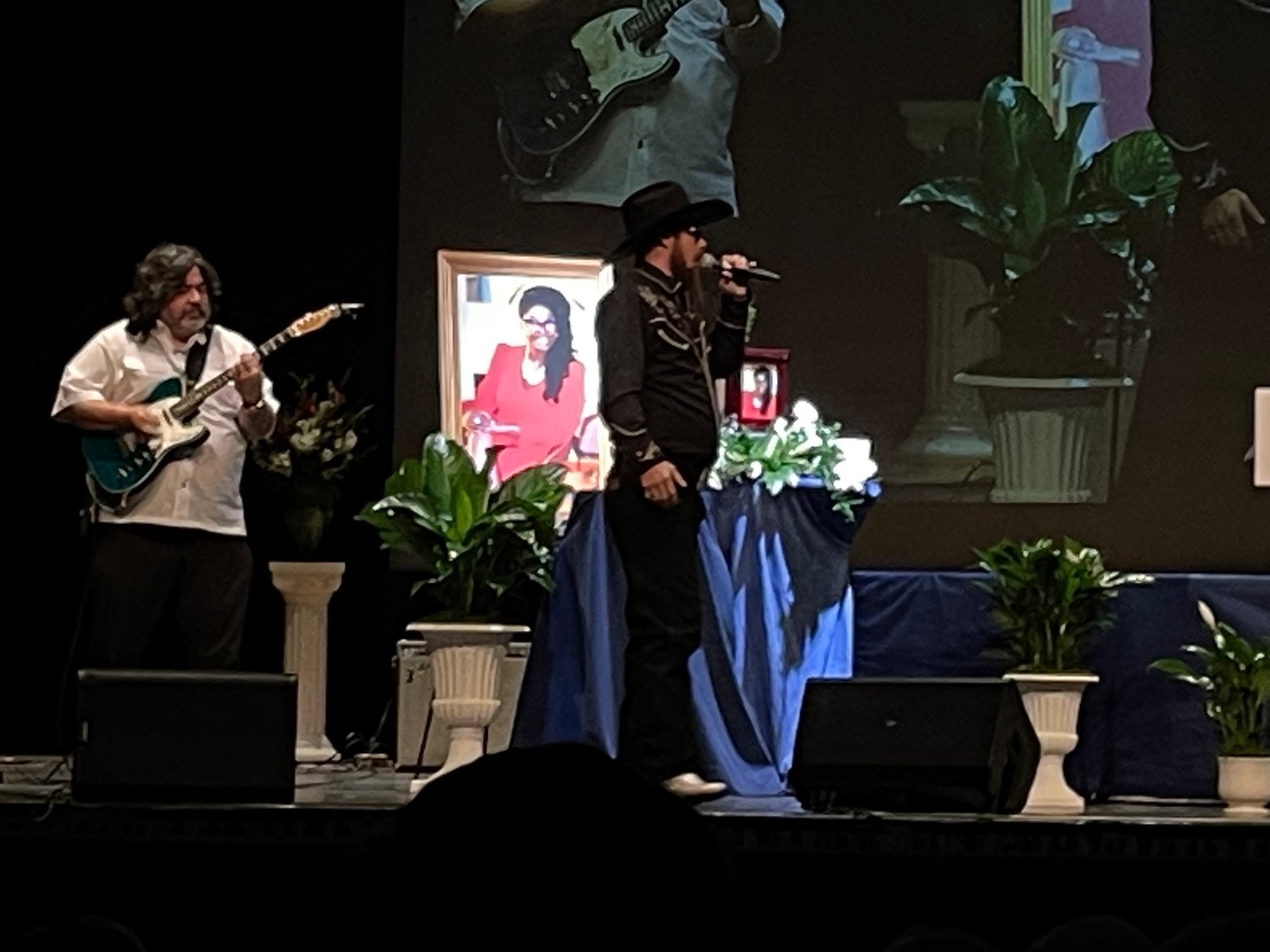 Former President Donald Trump was among the approximately 600 people who attended a celebration of life for Lynette Hardaway on Saturday at the Crown Theatre in Fayetteville.

Hardaway teamed with her sister Rochelle Richardson as social-media and cable-TV commentators Diamond and Silk.

Trump entered the stage with Silk by his side.

The place erupted at their presence.

“This is one of the greatest tributes I’ve ever seen,” he said during an 85-minute speech. “You have a lot of people watching (remotely). The world has lost one of its brightest stars.”

At center stage, a small table had been placed with a portrait of a smiling Hardaway and a pair of her golden shoes complemented by green plants and floral displays.

Hardaway and her sister have been among Trump’s most ardent supporters since he launched his first presidential campaign in 2015, remaining faithful to their beloved president over the years since.

Diamond and Silk, who are from nearby Hoke County, came to prominence as celebrities on the political right with their sassy, energetic videos and pointed political commentaries via YouTube, Facebook, Twitter and other social media platforms.

The 3 ½-hour service featured emotional words from members of Hardaway’s family, including her son, Paris; inspiring gospel music from the Everett Family Gospel Ensemble and the N.C. Rally Team Choir, the signature Leonard Cohen song “Hallelujah” as performed by Waylon Jennings’ son, Whey Jennings; personal testimonies from people from her inner circle; Lara Trump’s retelling of the Diamond and Silk story; and Trump’s speech that paid tribute to both Diamond and his own doings in the Oval Office.

This was a fervent pro-Trump service made up of largely older people whose cellphones captured the moment.

The audience loved it when organizers twice played a Diamond and Silk video from 2015 that made jokes about a presidential debate that was hosted by then-Fox anchor Megyn Kelly.

It was a good example of their humorous but bossy ad-libbing schtick.

Another one of their videos poked fun at President Joe Biden when he fell off a bicycle.

“This is not a sad day. This is a happy day. We’ll see Diamond again,” the fans inside the building were told.

Throughout the service, those seated were told that Hardaway was intelligent, a great storyteller, intuitive, a talker, a giver, possessed with a stream of energy and penchant for rhythm and rhymes.

Commentary from both Trump and Silk brought up what they said was a rigged election and that he was actually the current president.

“So sharp. So smart. So cute,” Trump said of Hardaway.

“Diamond was not afraid,” he said. “She was very wise. There was nobody like her.”

He noted how the duo had taken a lot of heat over the years supporting him. Earlier, Silk said the criticism was largely from the Black community for their devotion to the former president.

Unlike Trump’s previous trips to Fayetteville for political rallies, when demonstrators gathered to object to Trump’s appearance and his politics, only one protester could be seen outside on the grounds of the Crown Complex or inside the theater.

The former president was scheduled to return to Palm Beach, Florida, following the service.

North Carolina Lt. Gov. Mark Robinson stirred up the audience with his words from the pulpit.

“You know, I remember the first time I turned on my social media and I saw these young ladies speaking,” he said to exuberant applause. “I cannot tell you how proud I was. To see somebody who looked like me. Who believed like me. Who spoke like me. Who was unafraid like me. To stand up for truth. Stand up for righteousness. To stand up in the face of the ignorance we see today. Stand strong. So today we honor her. Honor her memory. I can tell you she lives on in the hearts and minds of those who loved her. Her voice will live forever.”

Diamond’s son, Paris, said he was an only child and that his mother was a single parent to him. “Her legacy will continue to live out,” he said, before having to be comforted by the rest of the Hardaway family who stood behind him.

He thanked Trump for “letting the light shine on his mother and his aunt, Silk Richardson.’’

During his speech, Trump spoke of things he has previously discussed, including the fake media, his accomplishments in office, how inflation and immigration have gotten out of hand under Biden, and how he had built up the military and done so much for the African American community in the United States.

“You’re bringing out the best in me,” he said to hearty applause.

“We wouldn’t have been successful without Diamond and Silk.’’