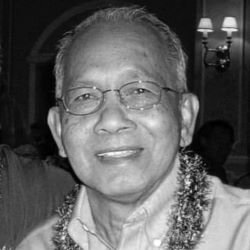 Warlito Guzman Capino, 79 passed away peacefully on November 22, 2022, while listening to the voices of his family here and in Heaven, expressing their gratitude and love for him as he made his way home.

Warlito was born in Narvacan, Ilocus Sur Philippines and later immigrated to Hawaii with his family. He grew up on the island of Molokai with his mother (Aniceta  Guzman Capino) and father (Fortunato Capino)  alongside his two younger siblings (Virgilio Capino) and (Annette Gorospe). He was a proud Vietnam War veteran who served three tours with the Signal Corp in the United States Army for 22 years and 4 months until his retirement in 1987. He went on later to work for (VBR) Vinnell, Brown & Root in Istanbul and later retired with Quality Sound and Video.

Wally married Kruawan Capino  (who preceded him in death in 2007) in Thailand on January 22nd, 1971. The military took them to many places including Ft. Huachuca Arizona, Verden Aller Germany, North Carolina and  Izmir, Turkey.  In each of the places they lived, amazing friends were drawn to them and their family with whom Wally worked, Fished, Hunted, Coached Softball, Volleyball, Bowling, and talked politics. He was outspoken about his freedoms and a proud supporter of the NRA and the Republican Party. He was a world traveler and loved eating and trying out new recipes from around the world. He was a great dancer and an avid reader, he enjoyed his electronics and he also enjoyed collecting comic books and watching action movies. His proudest accomplishment was living the American Dream, owning his own home, and putting his three children through college.

Warlito’s kind voice and deep generosity will be greatly missed. He will remain always in the hearts of everyone who knew him.

Private celebration and Military ceremony will be held at a later time.