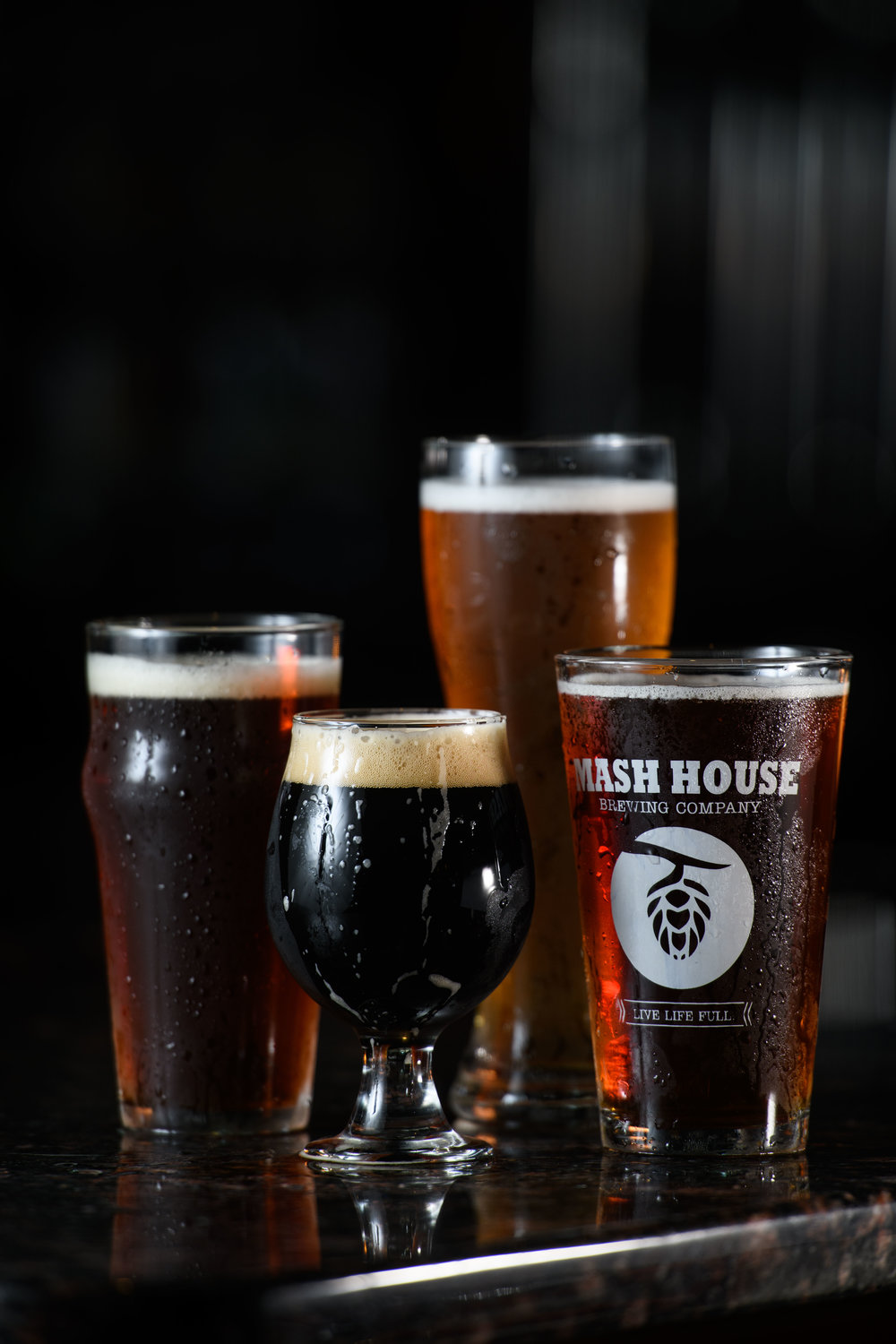 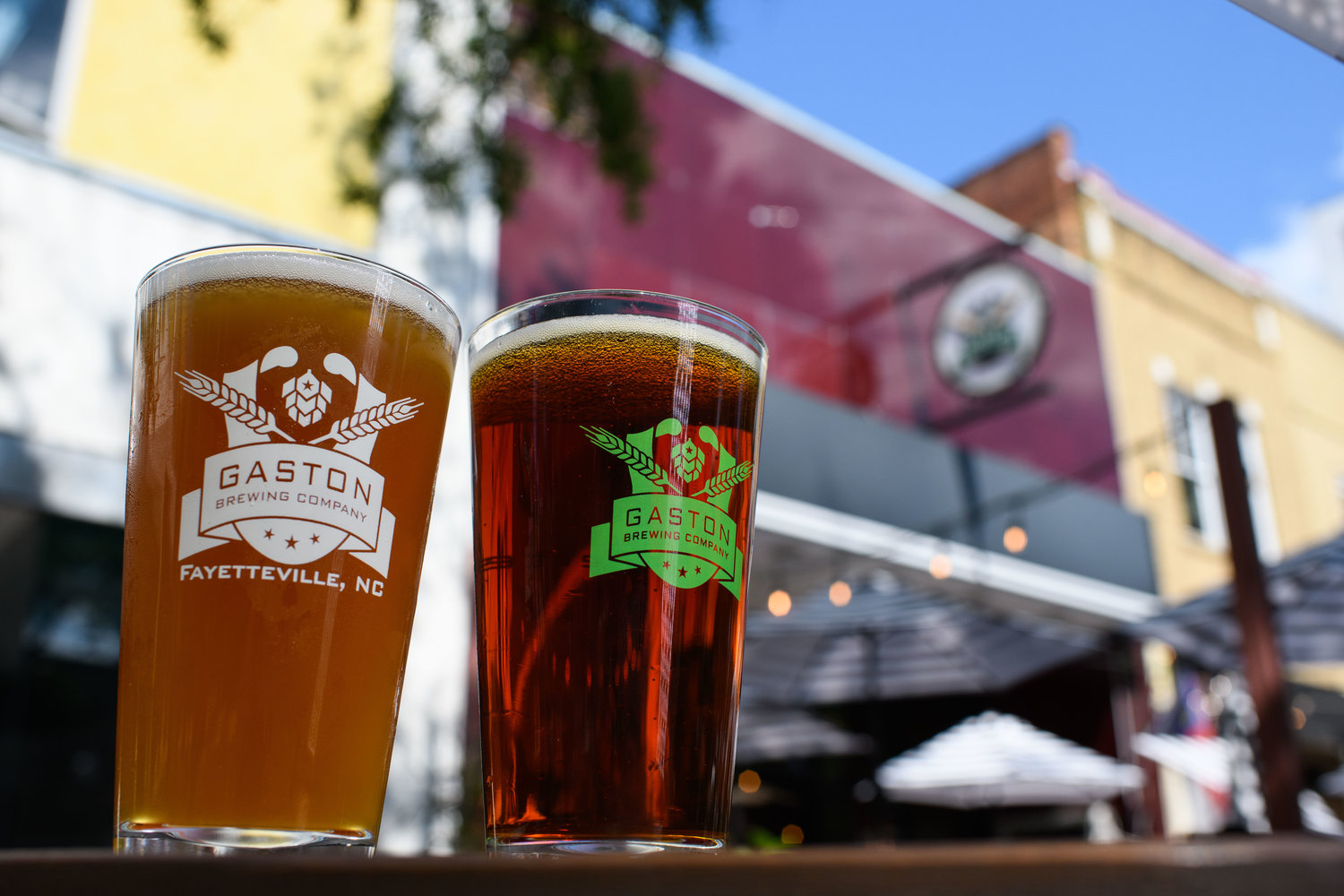 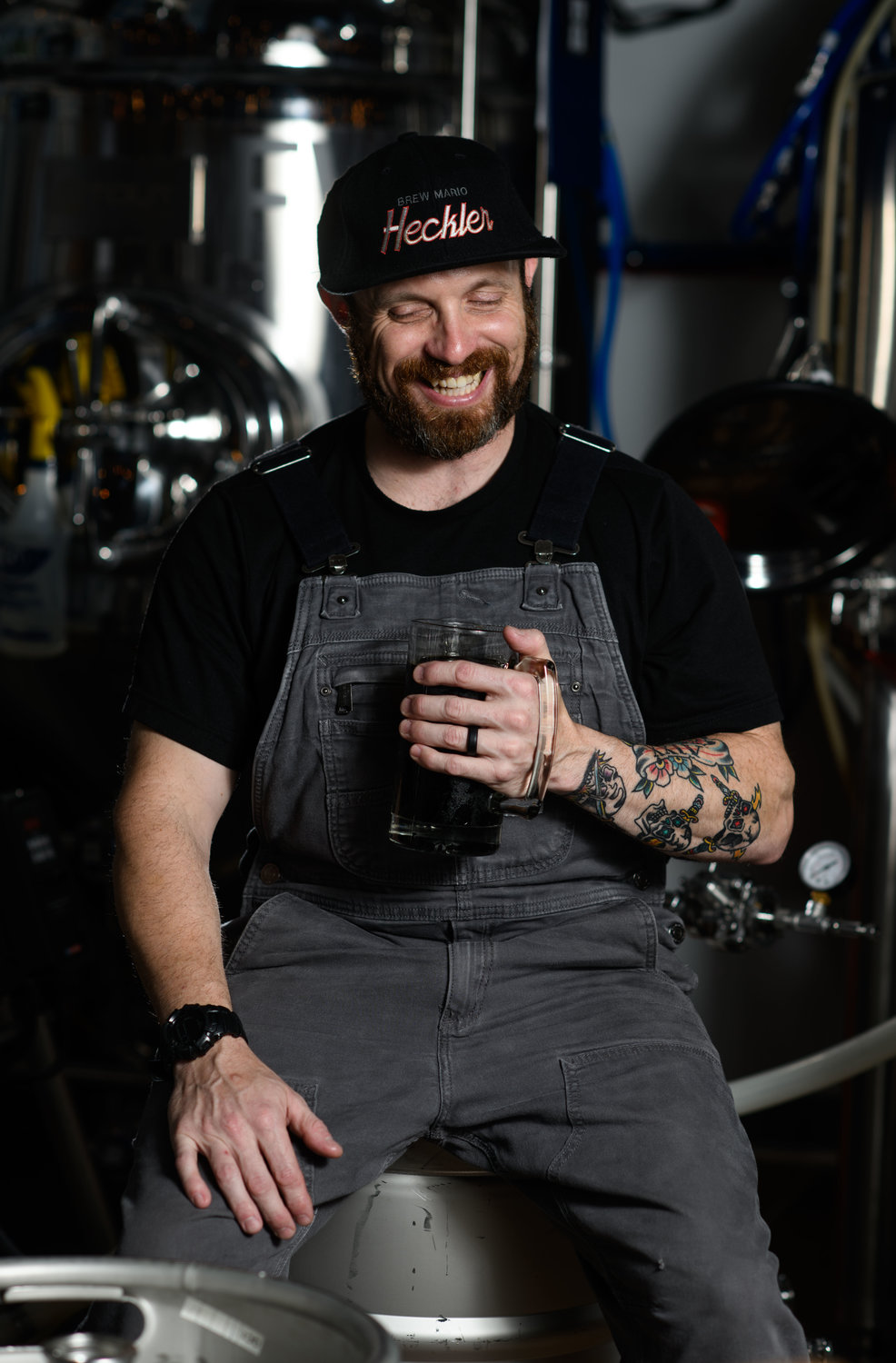 Assistant Brewer, Ken Bowman, poses for a portrait with his personal brew called Pirate Hooker, a milk stout he home brewed and then took to Heckler.
Melissa Sue Gerrits 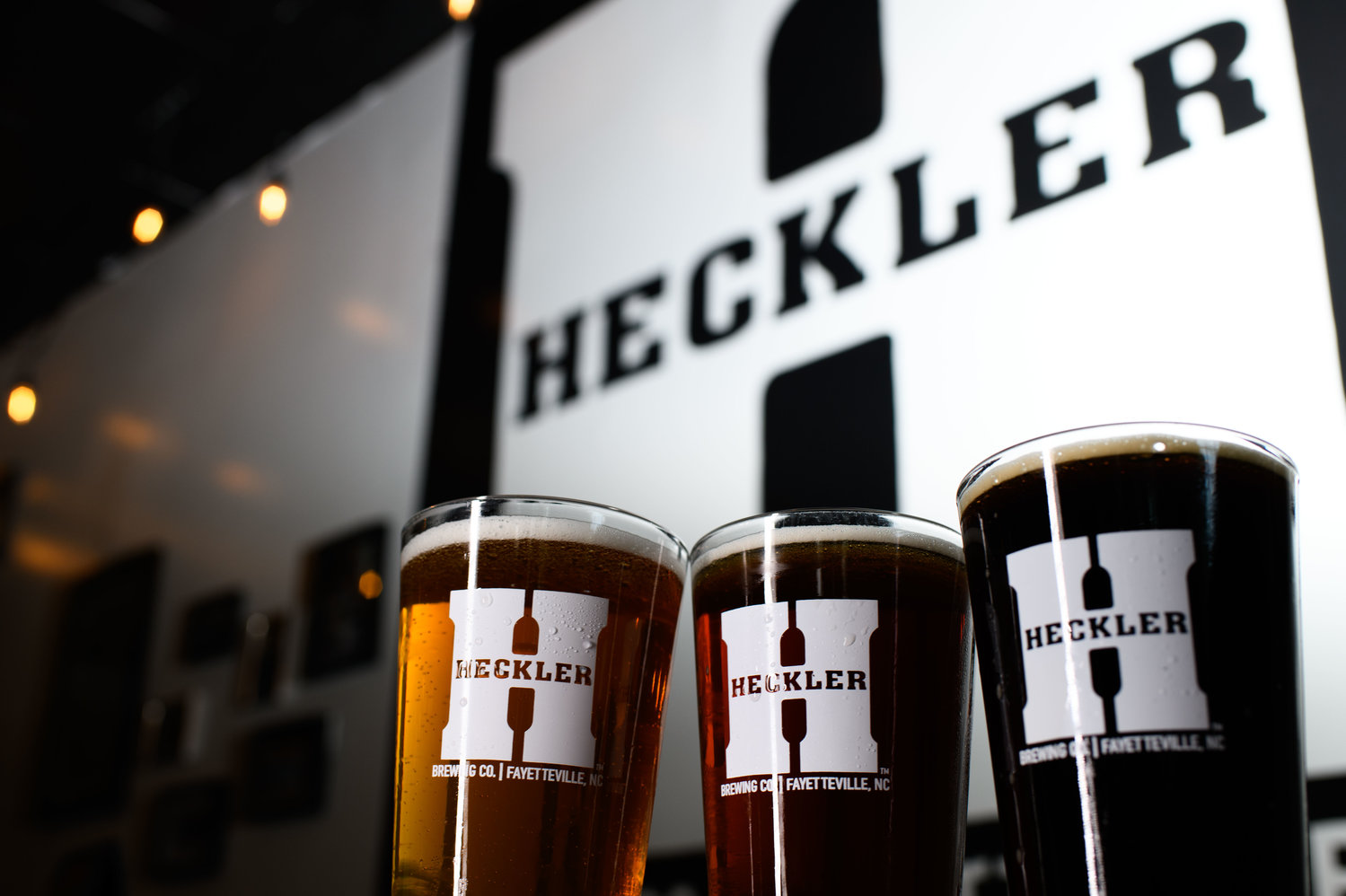 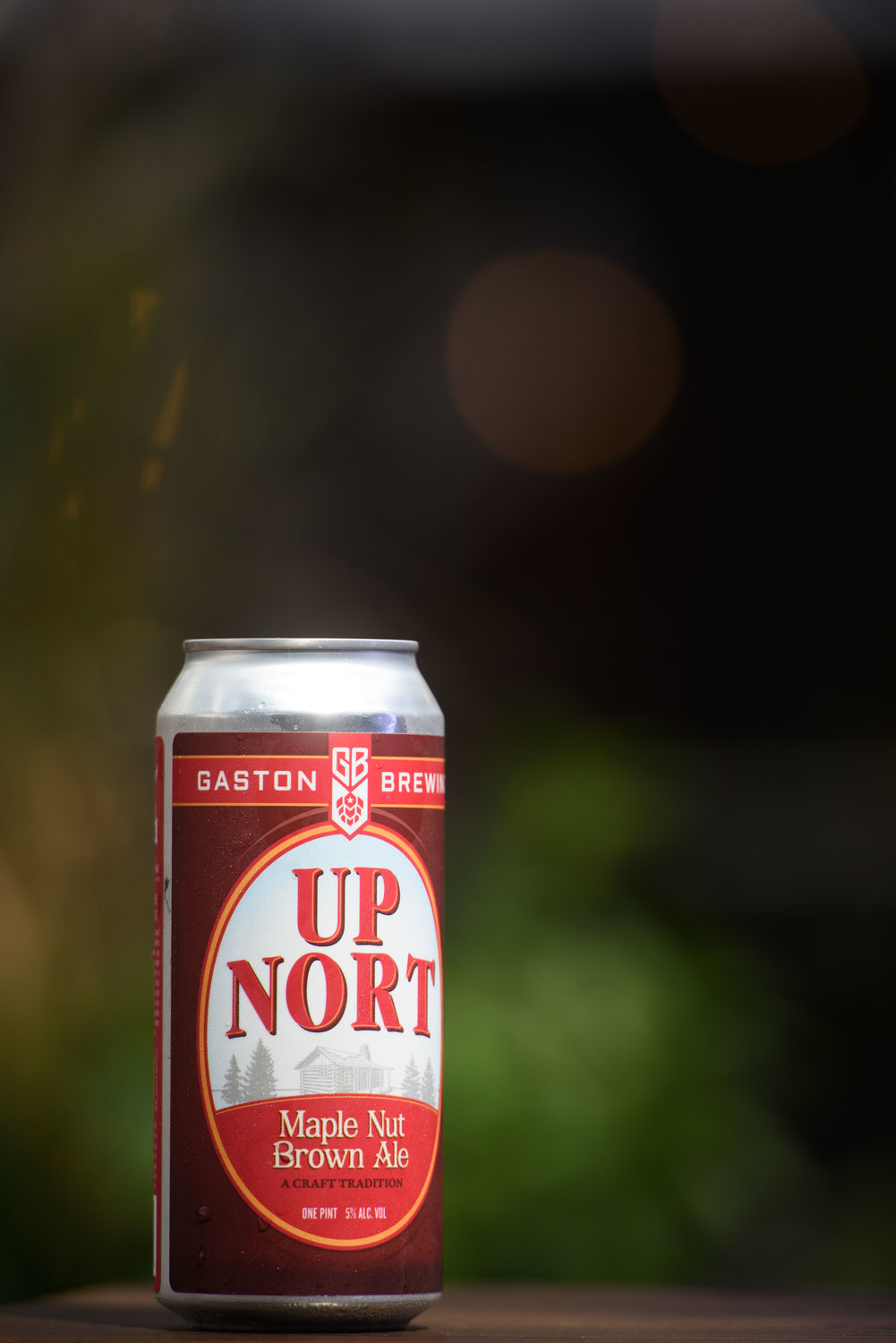 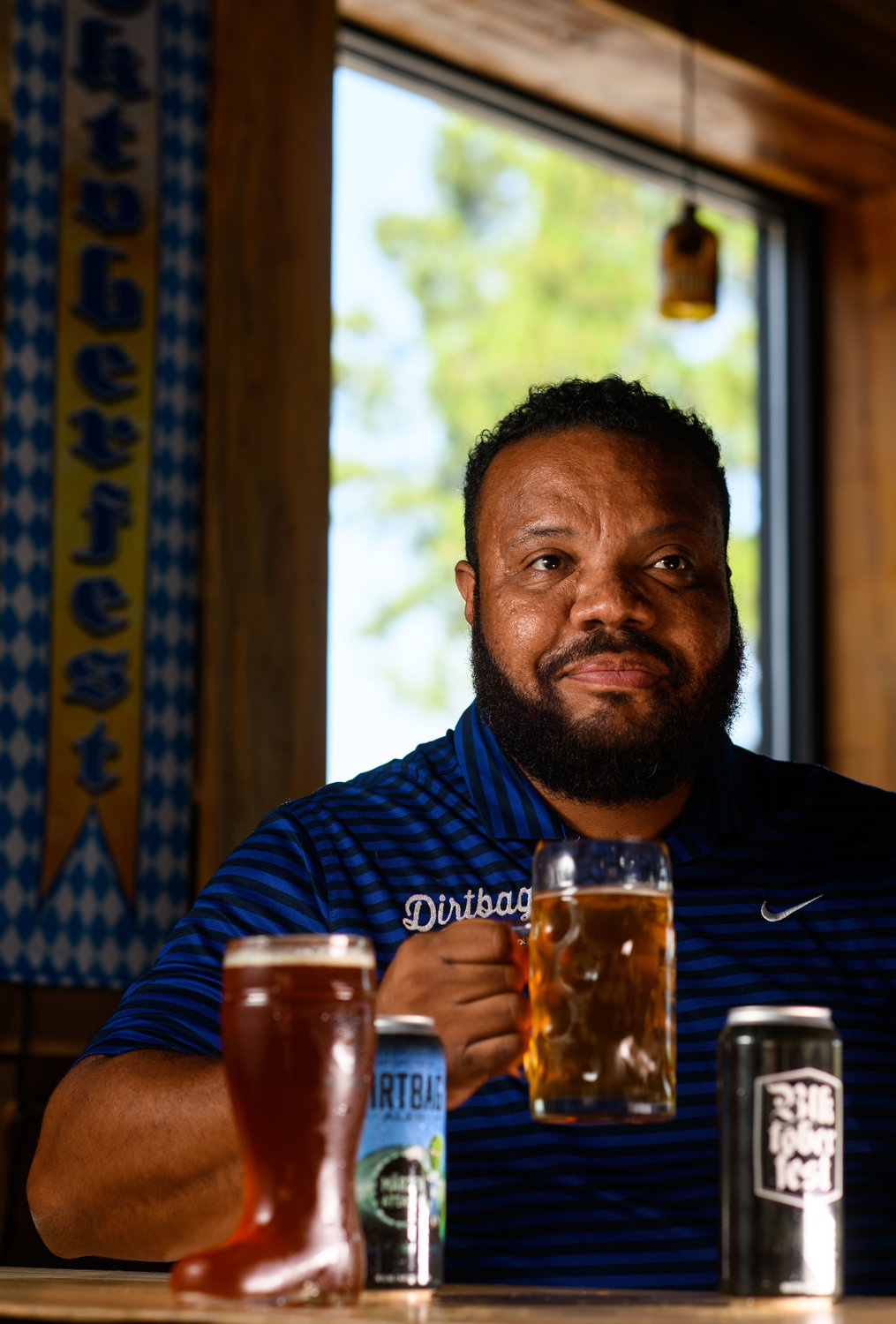 Brewmaster and part-owner Tito Simmons-Valenzuela, a former military medic, has been with Dirtbag Ales Brewery & Taproom since the get-go.
Melissa Sue Gerrits
Previous Next
Posted Monday, October 3, 2022 9:33 am
By Michael Futch | Photography by Melissa Sue Gerrits

October brings the promise of cooler, crisp days when a blanket of pine straw and a scattering of colorful leaves cover the ground.
For the beer aficionado, it means seasonal offerings of heartier and darker brews as we head into the chill of winter.
“I think during the fall timeframe, we try to kind of tailor our beer style to a richer, more robust style,” says brewmaster Troy Rassmussen of Gaston Brewing Co. “During the colder months, people are looking for more malty beers, richer beers. The demand is for darker, more robust beers. In the summer, people are looking for a light, refreshing lager or ale.”
So, what’s on tap over the next few months?
From breweries to microbreweries and brewpubs, there are plenty of places to quench your thirst in Fayetteville. Consider Dirtbag Ales Brewery & Taproom, Gaston Brewing Co., Bright Light Brewing Co., Huske Hardware House Restaurant and Brewery, Mash House Brewing Co., and Heckler Brewing Co.
Most are ready to fill your mug with Oktoberfest-style beers as well as a new brew or two for the winter.
Here’s a sampling of awesome ales, satisfying stouts and palette-pleasing porters to help turn the page on what was a long, hot summer.

First up is Mash House Brewing Co. at 4150 Sycamore Dairy Road.
Steve Groveunder is a managing partner with Jeff Shenk in the brewhouse and restaurant that’s located not too far from Cross Creek Mall. The son of a Marine veteran, Groveunder has lived in Cumberland County for 26 years and previously worked for the Olive Garden restaurant chain.
The Mash House brewmaster is fresh on the job: Brett Thomas graduated a few months ago from Appalachian State University with a degree in fermentation.
The Mash House twist on the standard autumn brew was released in September, says Groveunder. That’s when Oktoberfest gets underway in Germany, he notes.
That lager takes five to seven weeks to complete, while an ale can be brewed in 14 days.
“We are making a new beer called Buffalo Soldier,” Groveunder says. “That’s an imperial stout that we age in Buffalo Trace (bourbon) barrels. That’s a December beer. We condition that beer in Buffalo Trace barrels, and we serve it as a draft for a very limited time. It’s an imperial stout made in true stout fashion with lactose. It adds creaminess to the stout, and it takes on the flavor of that bourbon.
“It’s a high-gravity stout — the true definition of beers with a higher concentration of alcohol.”
In November, Mash House will add a pumpkin pie porter that will be served for about a week or 10 days around the Thanksgiving holiday, Groveunder says.
“We don’t keep it very long,” he adds. “It takes a while to make it. It’s like having pumpkin pie after Thanksgiving.”
Another offering is the new Brown Bomber Ale, which he said is made in true British round ale fashion. It will be the first beer that brewmaster Thomas has made from scratch, Groveunder says.

Next up is Heckler Brewing Co. at 5780 Ramsey St., the first brewery to open in north Fayetteville.
Danny Miller, a former member of the military, is the owner and brewmaster.
“I do really like beer,” he says. “There weren’t enough breweries or taprooms on the north side of Fayetteville.”
The microbrewery was incorporated in January 2020 and sold its first beer on Jan. 28, 2021, after wading through the height of the COVID-19 pandemic.
“We’ve been rocking and rolling ever since,” Miller says.
Heckler Brewing usually offers eight house beers, as well as eight additional brews that are rotated on tap. Wine and cider also are options for those who are not necessarily beer fans.
Miller describes Heckler’s Oktoberfest brew, which was set to launch in mid-September, as an Irish stout similar to Guinness, a milk stout whose popularity picks up in wintertime.
Another new fall beer is Kimpossibrue, a milder, tart brew known as a gose.
A high-alcohol imperial porter will be added in collaboration with Bright Light Brewing Co.
“It’s great for winter months, a real robust beer that will warm up your insides,” Miller says. “Hopefully, it will be a big hit. It’s been six or seven months in the works.”
The high-alcohol Belgian Tripel is expected to become more popular as it gets colder, he says.
“Some of our higher alcohol beers do better in the winter,” Miller notes.
Because the microbrewery is small, he says, “to make anything new is difficult. I really have only one or two new things at any given time.”

Next up is Gaston Brewing Co. at 124 Hay St.
Brewmaster Troy Rassmussen is originally from Wisconsin and relocated here from Colorado while serving in the military.
Gaston Brewing has its roots in Airborne Brew, which opened in August 2017. It reopened as Lake Gaston Brewing Co. before the name was tweaked in 2019.
“Everybody comes as our guest and leaves as our friend,” Rassmussen says.
After the business expanded in 2020, the actual brewery was moved to 421 Chicago Drive.
The brewery typically serves 14 to 16 beers on tap. It planned to release its Oktoberfest brew in early September.
“That’s a limited batch we do every year,” Rassmussen says. “The beer style is Marzen.”
Rassmussen says he is excited about a pumpkin Hefeweizen beer being rolled out for fall. It’s a collaboration with Hatchet Brewing Co. of Southern Pines.
“We are going to be rolling out a Mexican stout in the coming months, more toward the October-November timeframe,” he says.
That will be Pancho Villa’s Revenge, which has a pepper infusion for “a little bit of heat.”
“It’s a robust, chocolatey beer with a little peppery heat toward the end,” he says.

Dirtbag Ales Brewery & Taproom is not too far from Interstate 95 at 5435 Corporation Drive in Hope Mills.
Dirtbag has its roots as a contract business that opened in 2013. The taproom was added at the beginning of 2016, and three years later, the business moved to its current 6-acre site.
Brewmaster and part-owner Tito Simmons-Valenzuela, a former military medic, has been with Dirtbag since the get-go.
The brewery and taproom brew beverages on the premises.
For fall, Simmons-Valenzuela says, Dirtbag will release its Fest Bier, which he described as “an easy-drinking, clean lager like ale.”
Another addition is Marzen Attacks, a traditional Oktoberfest brew made with Munich and caramunich malt.
“It’s a caramelized version of Munich malt, a German-style malt,” he says.
This year marks the third return of Blacktoberfest, a Marzen-style ale meant to celebrate Black-owned breweries across the nation.
Simmons-Valenzuela says there’s more on tap.
“We’ll be redoing our stout and aging it in bourbon barrels for release later this winter,” he says.
Marzen Kolsh is popular year-round, according to Simmons-Valenzuela.
“For me, it would be the cleaner, more traditional style beer associated with fall.”
Although some customers associate it with pumpkin flavoring, Marzen Kolsh has caramel notes.
“It tastes like fall,” the brewmaster says.