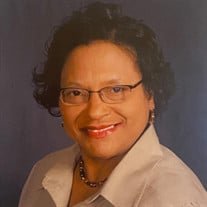 Posted Tuesday, November 29, 2022 5:01 pm
Colvin Funeral Homes & Cremations (via HM Colvin)
On November 27, 2022 we lost a beloved wife, mother, grandmother, sister, aunt, cousin, and friend. Ceretta has gone home to be with our Lord and Savior and those that proceeded her in death. Ceretta Raines was born January 23, 1949 at Pittman Hospital in Fayetteville, North Carolina to the late Burrell, Sr. and Daisy Raines.

Ceretta was the 2nd born of 8 children. She took pride in being that older sister who was there for her siblings when needed.

Ceretta married the love of her life and high school sweetheart, James Harris, Jr on February 7,1970. In their union 2 children were born, Karenda and James III. Ceretta was a loyal and dedicated wife, mother, mother-in-law, and grandmother. She was very proud of her family.

Ceretta began her career in banking more than40 years ago. She started her career as a teller, then became Head Teller, and was able to work her way up to Branch Manager. She was ecstatic to be in the Customer Service Industry. She was employed by Southern National Bank, BB&T, and Texas Bank. When Ceretta moved to Oklahoma she decided to go in a different direction where she began a new career with HR Block as a Tax Preparer and later Branch Manager. She retired with more than 4 decades providing services to others.

Ceretta was a great person who cherished the times she spent with family and friends. When you needed her, she was just a phone call away and willing to help in any way she could.

To send flowers or a memorial gift to the family of Mrs. Ceretta Raines Harris please visit our Sympathy Store.