Change could mean loss of $1.4 million in revenue annually 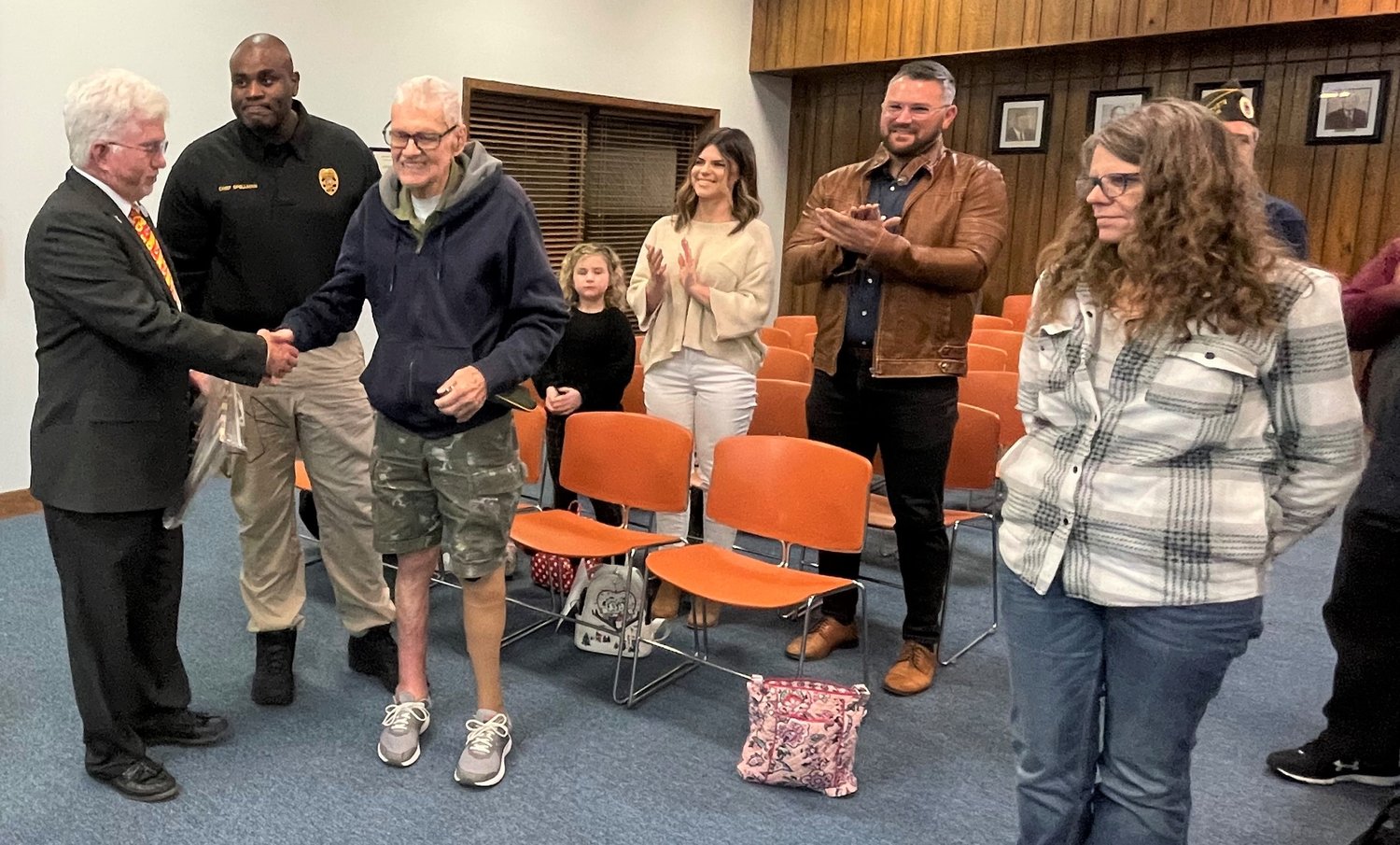 Retired Sgt. Maj. Charles L. Miller was presented with a plaque, town coin and handmade quilt during the Spring Lake Board of Aldermen meeting on Monday night.
Photo by Jami McLaughlin 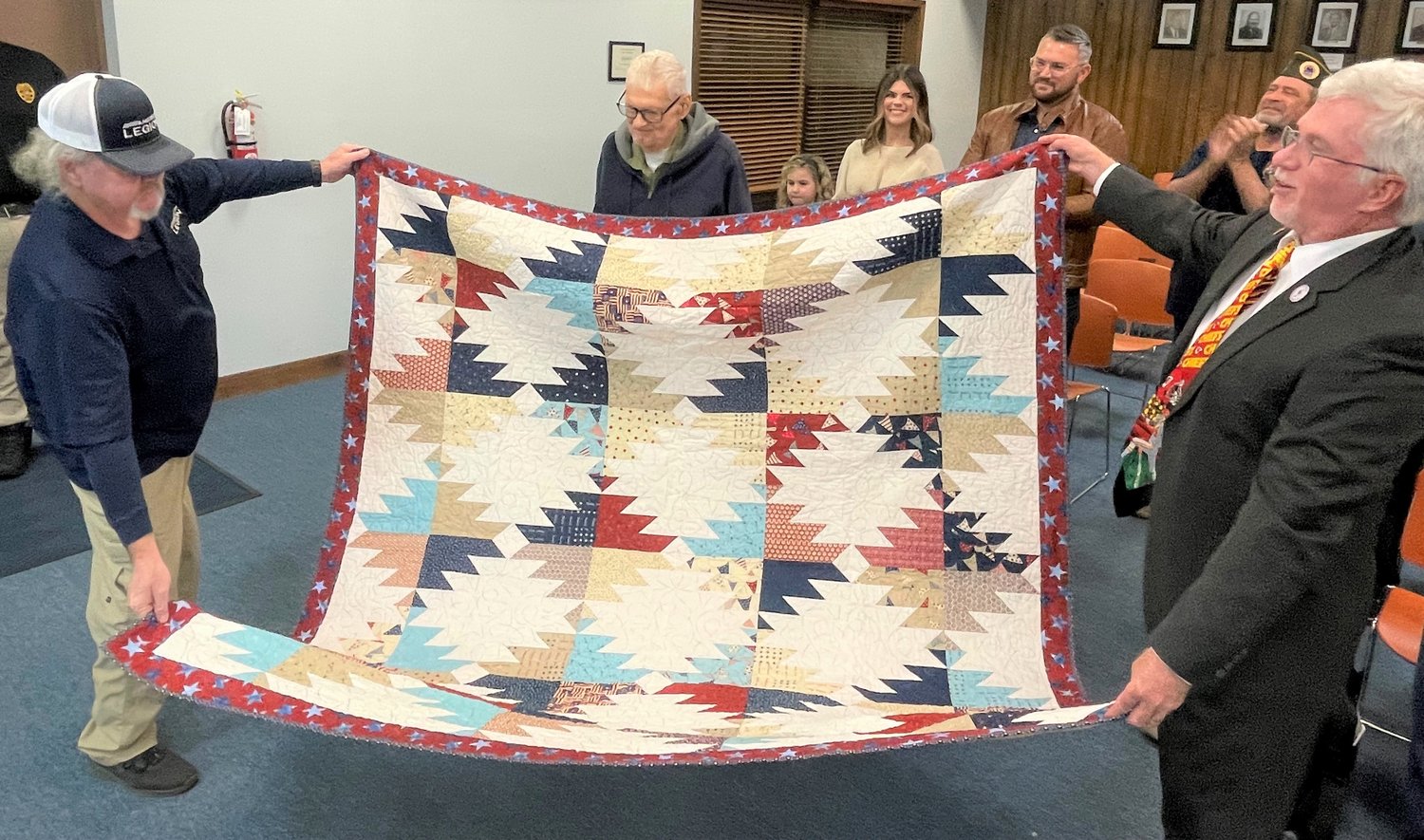 Retired Sgt. Maj. Charles L. Miller was presented with a plaque, town coin and handmade quilt during the Spring Lake Board of Aldermen meeting on Monday night.
Photo by Jami McLaughlin
Previous Next
Posted Monday, January 23, 2023 11:24 pm
By Jami McLaughlin

SPRING LAKE — The Spring Lake Board of Aldermen voted Monday night to approve a new sales tax agreement among Cumberland County municipalities that could mean a loss of $1.4 million in revenue annually for the town.

The Cumberland County Board of Commissioners proposed changing the sales tax collection method from per capita, or a flat rate, to ad valorem, or based on property value. The switch would cost each municipality in the county tens of thousands to several million dollars a year.

The current agreement, which has been in effect since 2003, expires on June 30, but the towns want the change to be postponed for another five years.

Mayor Kia Anthony said the interlocal agreement is necessary and that Spring Lake is positioned to lose $1.4 million in sales tax revenue annually.

“This interlocal agreement was distributed to all nine of the municipalities within Cumberland County, and the Mayors Coalition unanimously decided that an extension would be required simply because Cumberland County has suffered through two major storms as well as a global pandemic. We are trying to get everything back on track,” said Anthony.

The board also received a midyear budget report from David Erwin, the town finance officer and accounting and financial management adviser for the N.C. Department of the State Treasurer.

“The town is fine for where we are at this point in the year,” said Erwin, as he went through revenue and expenditures for the first half of the $7.7 million annual budget.

He said interest income is “astoundingly good” and because the balances are up, the interest is providing a safety net to help build the fund balance.

Erwin noted that two higher expenditures can be attributed to unexpected timelines such as the town still needing to pay contracted finance staffers instead of hiring a finance manager. The budget was set with the expectation of having at least half of the finance staff in place.

“We thought we’d get into hiring, but we haven’t gotten there yet,” said Erwin.

He said ideally, the town will soon hire a finance officer who could then hire a staff, but the town might need to look at hiring lower-level accountants to fill in.

The town is in the process of hiring a permanent town manager and has recently reopened its search.

The other adjustment in the budget was because of the transition of the Spring Lake Parks and Recreation Department and senior center to Fayetteville-Cumberland County Parks & Recreation on Nov. 15, instead of the anticipated July 1.

Erwin said that overall, the town staff is learning good budget habits and that instead of bad practices in the past — like committing to projects without checking the budget — the budget is now being taken into consideration daily.

“The fact that it is a good balance and is earning interest is a real plus from where things were two or three years ago,” said Erwin.

Alderman Raul Palacios asked if there was an update on the audit. Ewin said the town is almost ready to bring in auditors to start doing their fieldwork in the next 30 to 60 days.

“We are moving forward on getting that audit started,” said Erwin.

Erwin also said the budget calendar will be discussed in early February and the board will be consulted in late February or early March so that members can participate in the process this year.

When the board returned to open session, Alderwoman Sona Cooper made a motion to file a complaint with the North Carolina Board of Certified Public Accountant Examiners about previous auditors S. Preston Douglas and Associates in Lumberton.

The town contracted with that accounting firm to audit Spring Lake’s financial statements since 2015.

“They could not have done true audits because our bank reconciliations were a mess,” said Cooper.

The board voted unanimously to file the complaint.

In other news, Alderman Marvin Lackman, an ex-officio member of the Military and Veterans Affairs Advisory Committee, along with members of Veterans of Foreign Wars Post 4542 and Post 9103 and American Legion Post 230, recognized retired Sgt. Maj. Charles L. Miller with a plaque, town coin and handmade quilt. Miller was a charter member of VFW 9103 in Spring Lake and served 24 years in Army Special Forces.