The art of the sandwich 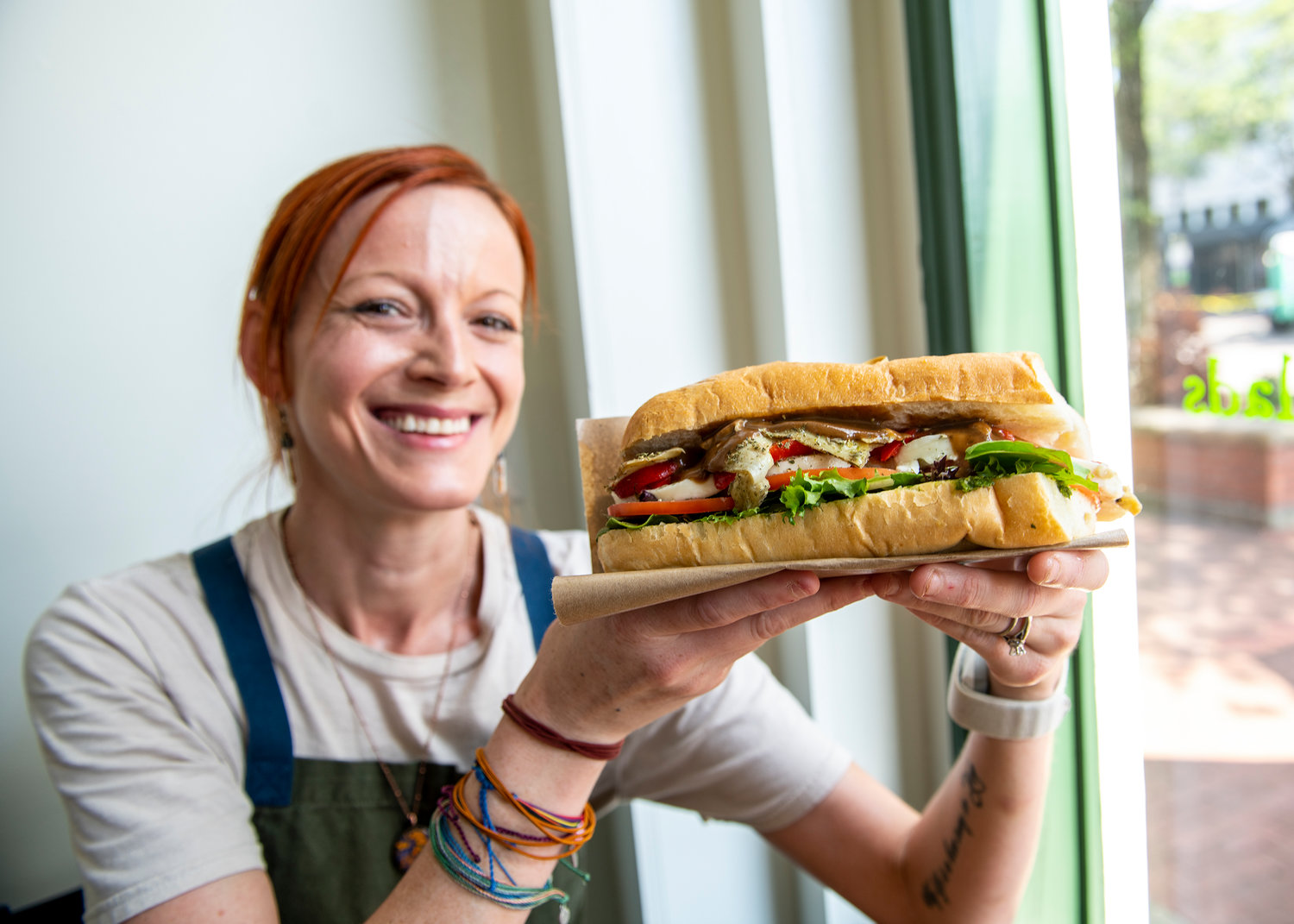 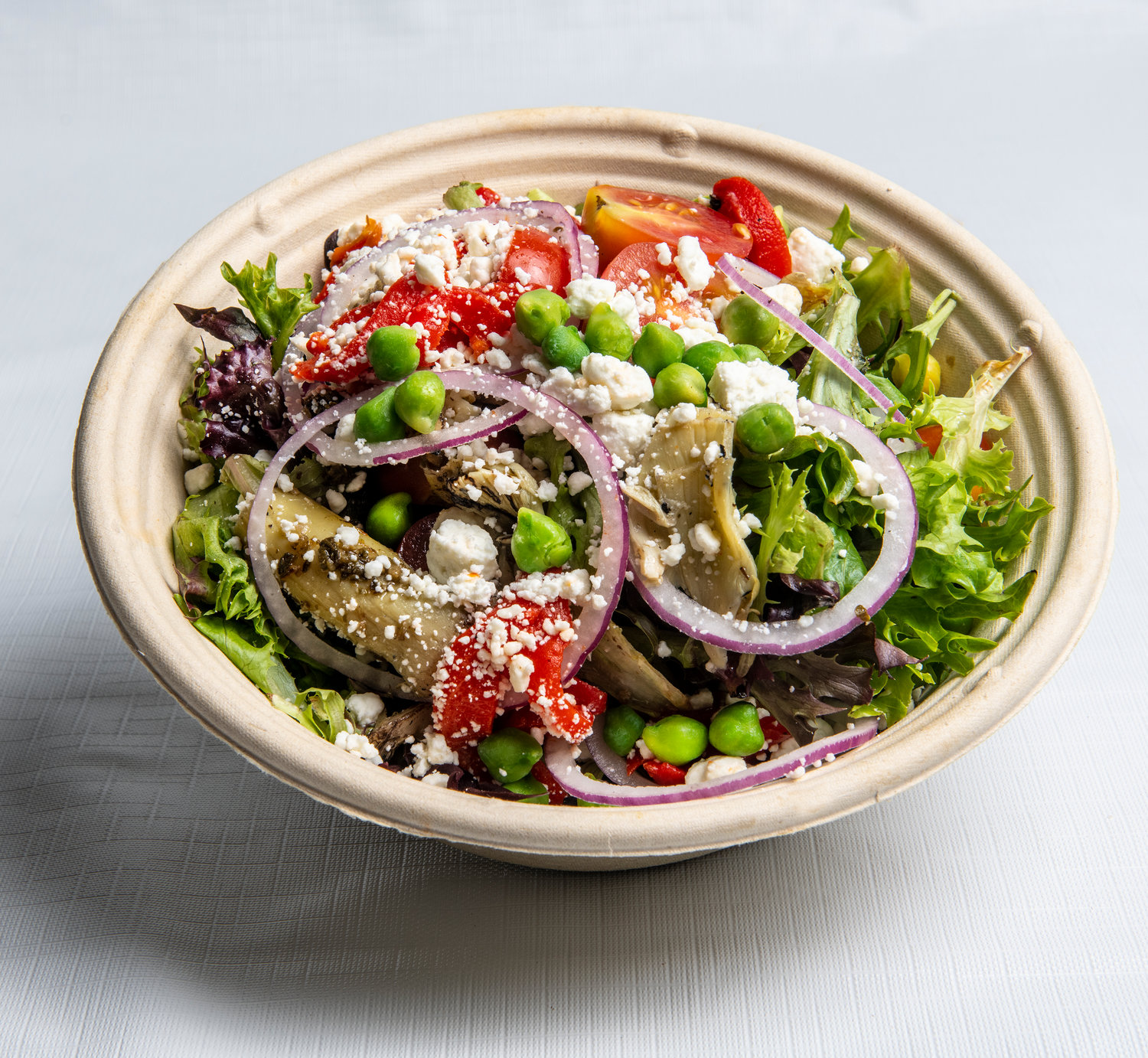 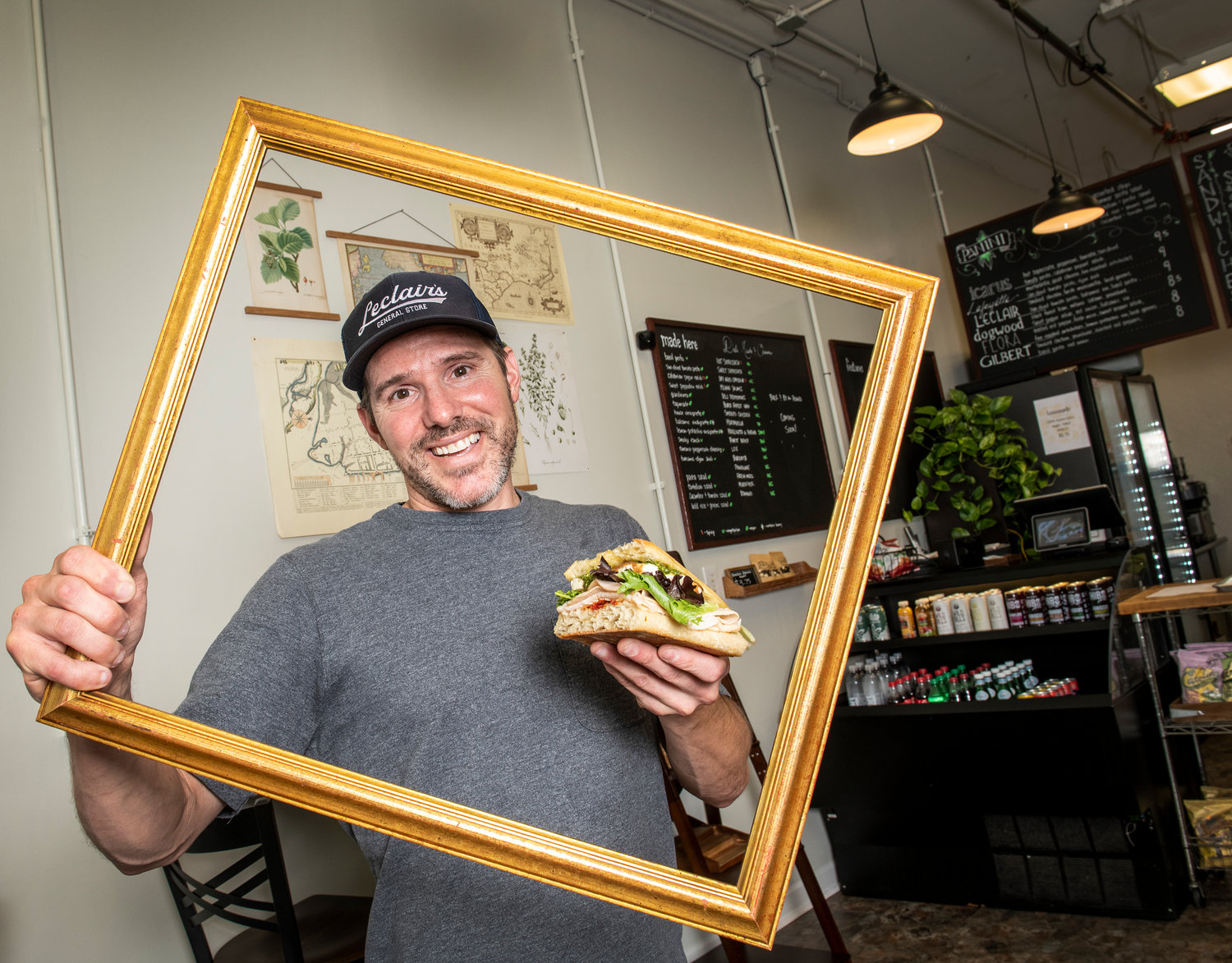 Patrick Leclair shows his signature sandwich, the Leclair panini, made with thin slices of smoked chicken and fresh mozzarella, local greens, sun-dried tomato pesto, balsamic vinaigrette and basil pesto. It’s $9. Leclair owns Leclair’s General Store on Haymount Hill. He and Malia Tyner, a designer at his store, curated the art at Pan, which includes vintage nautical maps and botanical prints in antique gold frames. Tyner also has a sandwich named after her on the menu.
Cindy Burnham 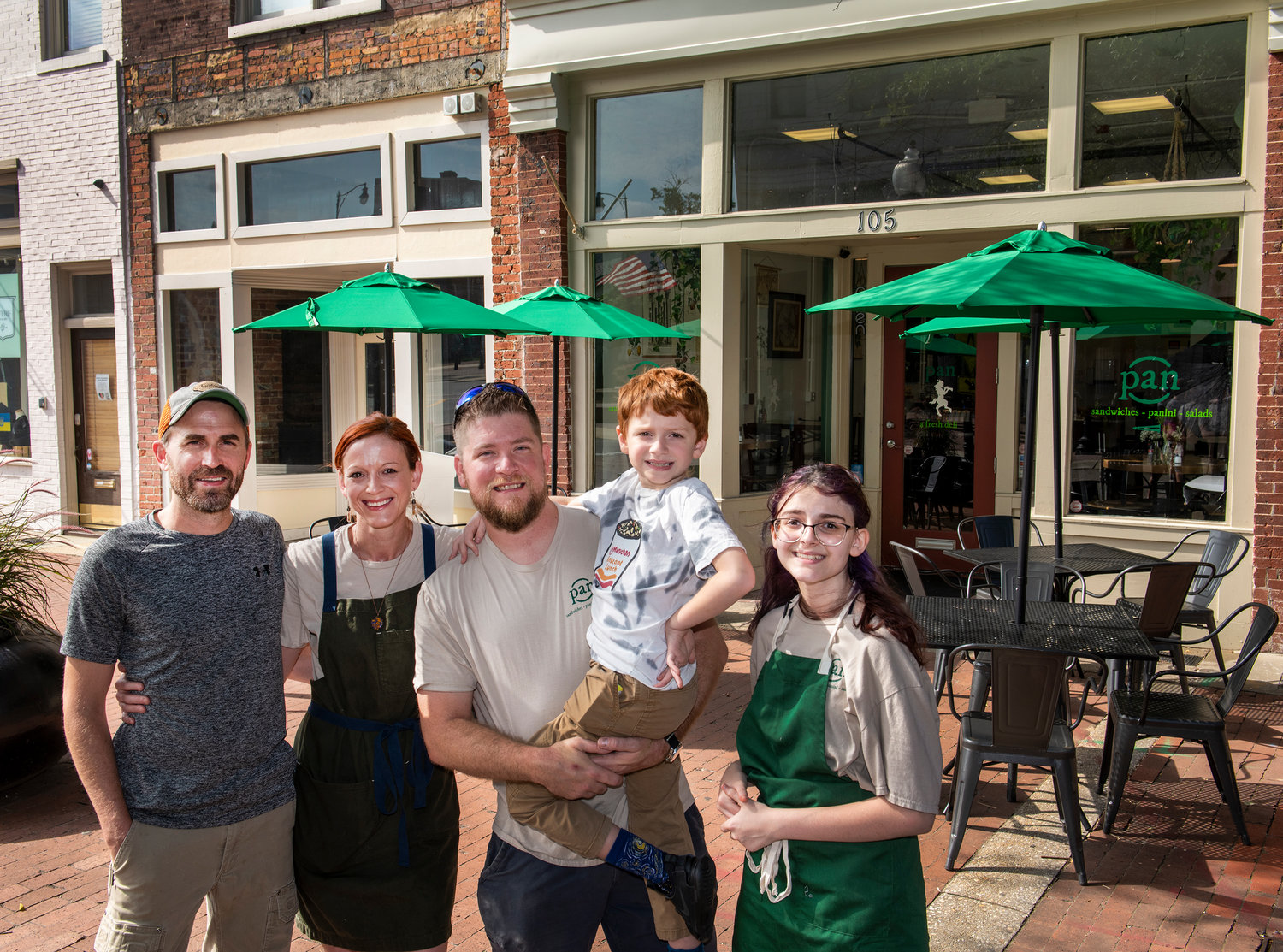 The business is a family affair. From left are Adam Smith, brother of Staci Graybill; Staci Graybill, Brian Graybill; and their son, Connor, and daughter, Joslyn LaCosse. The Graybills credit their dedicated teams at both their Pan and Napkins restaurants for running smooth operations.
Cindy Burnham
Previous Next
Posted Sunday, September 4, 2022 8:05 am

I believe Fayetteville is the next food renaissance. We’re right on the cusp, and it’s starting in downtown … where it’s easy to be a little quirky.”
By Janet Gibson | Photography by Cindy Burnham

Brian and Staci Graybill are passionate about food and, specifically, the possibility to elevate a humble sandwich to something special.
Their creativity in the kitchen — using the freshest ingredients, many from North Carolina farmers and purveyors — comes to fruition at Pan, an artful eatery that’s quickly become a lunchtime favorite in the heart of downtown Fayetteville.
Pan is a place where the aroma air-kisses you with a kind of bakery-meets-deli vibe. Inhale deeply. You’ll detect fresh bread — and even a hint of floral from just-picked wildflowers in petite vases on the tables.
Open since June, Pan — which translates “bread” in Spanish and variations thereof in Italian and French — has additional significance, says Brian. There’s the cooking tool reference, of course. And a mythological Greek figure used in the restaurant’s logo and marketing is named Pan.
This is the Graybills’ second installment in the local food scene. The couple also own Napkins at Dirtbag Ales Brewery & Taproom in Hope Mills, which relies heavily on high-quality fresh ingredients, with many sourced locally.
Peruse Pan’s chalkboard menu, hung high above the counter area, then place your order there. A friendly server will deliver the food to your table in the 25-seat dining room or on the sidewalk patio, or order it to go. Many items range from $8 to $12.
Memorable sandwiches — and a few salads, too — are the main draws here. Beautifully layered masterpieces are inspired by, and named for, people and places in the community who have helped the Graybills along their journey.
The Leclair, a bestseller, combines thin slices of smoked chicken, fresh mozzarella, local greens, sun-dried tomato pesto, balsamic vinaigrette and basil pesto on grilled ciabatta. The sandwich is named in honor of Patrick Leclair, owner of Leclair’s General Store on Haymount Hill. While the art on Pan’s walls was culled from the general store, Leclair is quick to credit fellow designer Malia Tyner with curating the displays of vintage nautical maps and botanical prints, some in antique gold frames. There’s also a sandwich named after Tyner.
There’s a vegetarian selection named the Stace, for Staci Graybill, a longtime local actress. Her teenage daughter, Joslyn LaCosse, who works at Pan, is following in her mom’s footsteps onstage. Hence, there’s also a sandwich named the Gilbert, as a nod to the downtown theater company.
Both Staci and Brian seem to be perpetually in motion. Brian is a veteran who enlisted in the Army shortly after 9/11. He currently serves as treasurer of the board for the Veterans Farm of North Carolina in Harnett County, a nonprofit group that’s dedicated to training veterans to work in agriculture, including sustainable livestock production and organic vegetable production.
His passion for promoting local and small businesses is evident in every corner of Pan. Breads are primarily sourced from two Fayetteville businesses: Superior Bakery and Bread & Sugar by Dali. San Giuseppe Salami Co. in Elon supplies many of the meats. Most of the cheeses are from Wisconsin.
What you won’t find: ketchup, mustard or mayo, in favor of house-made goodness such as pesto, relishes and tapenade. A variety of salad dressings are made in-house, notably the excellent lemon-pistachio vinaigrette and Romano-peppercorn.
Nothing is fried here, either. The side items include cool favorites such as tortelloni salad and cucumber/tomato salad. Freshly made lemonade and sweet tea, plus sodas, juices or bottled water, are the beverages of choice.
“I believe Fayetteville is the next food renaissance,” Brian says. “We’re right on the cusp, and it’s starting in downtown … where it’s easy to be a little quirky.”
Pan, a pet-friendly cafe, is at 105 Hay St. in downtown Fayetteville. It is open for lunch from 11 a.m. to 3 p.m. Tuesday through Saturday. Co-owner Brian Graybill plans to expand with breakfast in the near future. For the latest news from Pan, visit its Facebook page.

One dead in Saturday morning shooting