Bill Kirby Jr.: 1976 photographs of Elvis in concert are safe and secure

Photos of the king of rock ’n’ roll at the Crown Arena in 1976 will be on display for ‘Elvis: Next Stop Fayetteville’ on Saturday 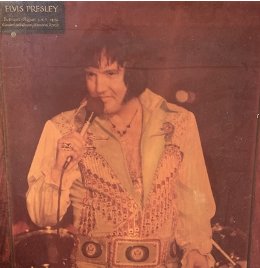 If the late king of rock ’n’ roll ever had a fan, it’s Phil Barnard.

He always enjoyed seeing those wood-framed photographs of Elvis Presley hanging in the hallway of the Crown Complex arena showing Presley when he performed here Aug. 3, 4 and 5 of 1976. Barnard had me do some research about four years ago about what happened to the photographs that went missing.

With help from Paul Beard, now general manager of the Florence Center in South Carolina, we found the photographs. Beard, once an assistant manager at the Crown under Rick Reno, retrieved the photos after Reno apparently had them discarded in a dumpster. Beard kept them in a shed behind his Evergreen Estates home and later returned them to the Crown.

“Well, after the great work you did reporting on and actually discovering the lost Elvis photos that had been displayed for so many in the old Cumberland County Memorial Arena, it seems they are still sitting stagnant somewhere after three years,” Barnard says. “The last correspondence we heard from was the former general manager of the Crown last year. He basically stated the photos were on Crown property and nothing else.”

Barnard says he was reading the August edition of CityView magazine, and now he is wondering again.

“I read the article in CityView that Michael Futch recently wrote on Milton Smith, and one of the photos was included in the article,” he says about Smith, who was supposed to tour as the pianist for Elvis just before Presley died at age 42 on Aug. 16, 1977. “Can you attempt to shed any more light on the story that just can't seem to find an ending? Let's get Elvis not just back in the building but actually visible to the public.”

And in the words of the king of rock ’n’ roll, “Thank you. Thank you very much,” Barnard says.

Photo displays on loan for now

The Elvis Presley photographs from 1976 are secure.

“We do still have those photos, but they are currently out on loan to Tony Chavonne from CityView Media for a ‘Summer in the City’ Elvis event that they are holding at the end of the month,” says Seth Benalt, general manager of the Crown Complex. “Did you need them for something?”

Barnard is like the television detective Columbo when it comes to tracking down those Elvis photographs that were hanging so long in the arena hallway. Once they are out of his sight, Barnard is on the case.

“Elvis: Next Stop Fayetteville” is scheduled from 7 to 11 p.m. Saturday at SkyView on Hay at 121 Hay St. It’s another one of those ideas that Tony Chavonne likes to “noodle” on when it comes to bringing out the best of and for Fayetteville. There’s no telling what kind of garb the CityView Media publisher and former four-term mayor will be wearing for this one. And I wouldn’t be the least bit surprised if he rolls up in a pink Cadillac like Elvis once owned.

And the Elvis photographs will be on display at the event. Don’t be surprised, too, if you see Phil Barnard there on the security detail.

Once the “Elvis: Next Stop Fayetteville” is done, the photographs are heading back to the Crown Complex.

“Our board has requested that we display them in the old arena,” Benalt says, “so they will be hung there upon their return.”

Thank you, Mr. Benalt. Thank you very much.