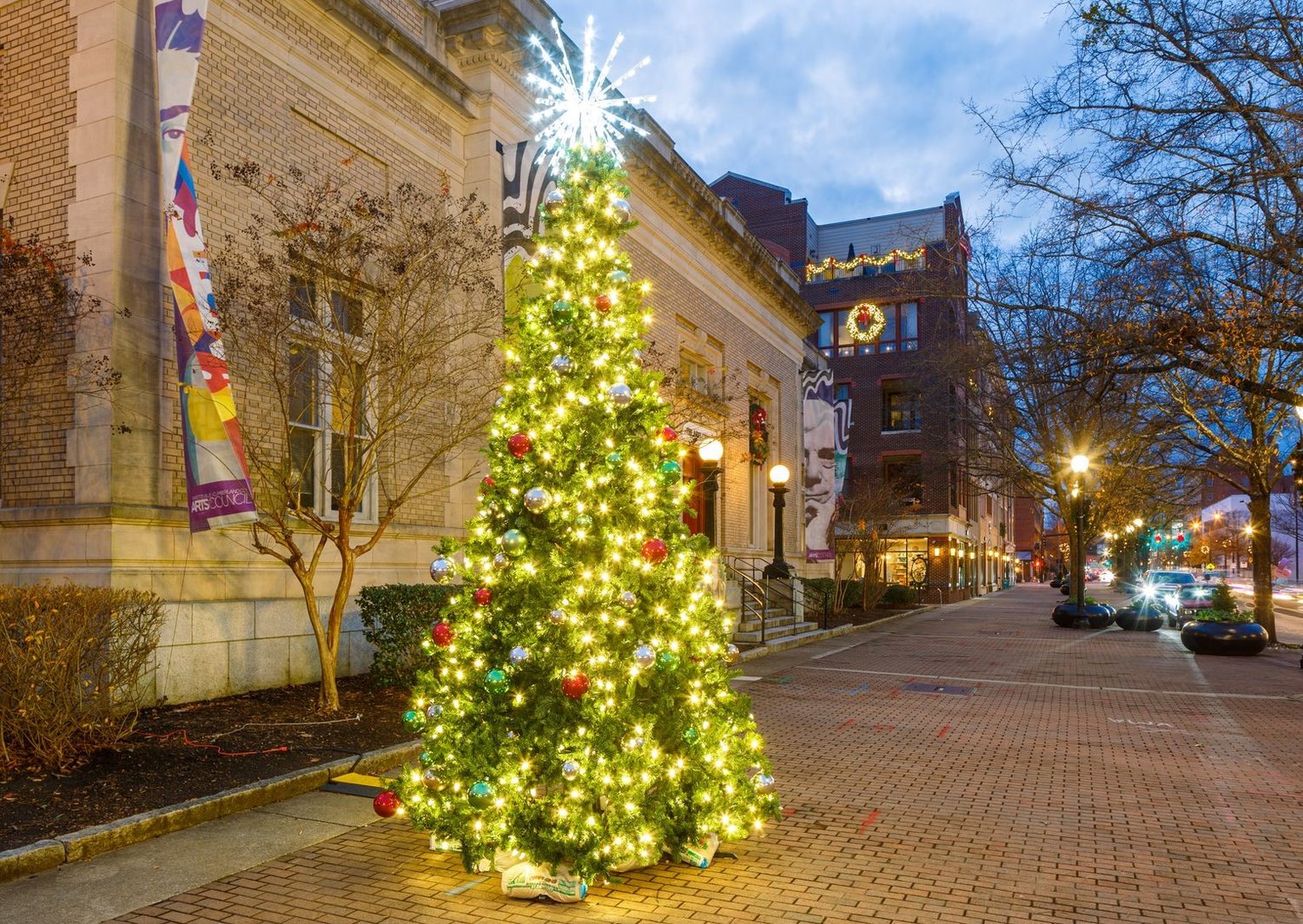 The Christmas tree at the Arts Council headquarters downtown will be even bigger this year.
File photo by Tony Wooten
Posted Friday, September 23, 2022 5:41 am

Downtown will be all dressed up for the coming Christmas season with 200 new red- and gold-trimmed bows along Person Street and an even taller holiday tree at the Arts Council of Fayetteville-Cumberland County. The bows will be placed on the 200 sprays and wreaths hung throughout the downtown area, says Bianca Shoneman, president and chief executive officer of Cool Spring Downtown District. “The illuminated display will be placed on Person, likely near the Sweet Palette and Backaround Records.” The city, Shoneman says, is absorbing the cost of $39.000. “It’s important to note that new bows or wreaths have not been purchased in over 20 years. These materials are commercial grade, designed to withstand wind and discoloration, and do cost more. However, their lifespan is substantial. We believe these costs are essential to facilitating a joyous holiday season for the community.” If Shoneman says the old decorations needed replacement, you likely can count on her word. Shoneman is a straight shooter.

Speaking of the holiday season, a lot of folks are pleased to see A Dickens Holiday will be a part of downtown festivities the day after Thanksgiving at the Fayetteville Area Transportation and Local History Museum at Franklin and Maxwell streets. You can thank downtown merchants Hank Parfitt, Elaine Kelly, Molly Arnold and Isabella Effon of the Downtown Alliance for standing up to the Arts Council of Fayetteville-Cumberland County board of directors, which wanted to end the Dickens celebration after 22 years. Now we can have it all, including the Arts Council’s “Holidays on Hay … A Season of Light.” See how easy all of this turned out when people work together?

Look for downtown to come alive this weekend with the pageantry of the 44th annual International Folk Festival after a two-year hiatus. “We are back and stronger than ever,” Bob Pinson, interim president and chief executive officer of the sponsoring Arts Council of Fayetteville-Cumberland County, says in a news release about the Saturday and Sunday festival. “Our festival has always brought the community together to interact with different cultures and celebrate what makes us unique. Our festival reminds us that we are stronger together and will accomplish more than we will ever do as individuals.” More than 30 cultural groups will be represented in the Parade of Nations, followed by cultural festivities and exhibitions including culinary arts. Festival hours are 10 a.m. to 7 p.m. Saturday and noon to 7 p.m. Sunday. There is no charge to attend the festival.

Some of us believe the Fayetteville Technical Community College board of trustees got it right in choosing Mark Sorrell to succeed the retiring Larry Keen as president of the state’s third-largest community college. As senior vice president for academic and student services, Sorrells knows FTCC. “I will do my best to carry on the legacy of Dr. Keen,” Sorrells says in a news release, and Sorrells could not find a better leader to follow than Dr. Larry Keen. Sorrells takes over Jan. 1.

“We were driving through downtown,” says former Fayetteville resident Joe Aboid, who now lives outside Lynchburg, Virginia, “and they’ve done a good job down there.”

“Very well said,” Ronald Flanary writes in an email about our Sept. 21 column on Todd Lecka, the longtime executive with Putt-Putt Golf Courses of America. “I worked for Putt-Putt for 10 years at the office and courses. He was very respected and great to be around.” Charles Todd Lecka died at age 95 on Sept. 16.

“Job well done, Bill,” Scott McInvaille writes in an email about our column remembering Todd Lecka. “A fitting and proper tribute to an extraordinary individual.”

“I did not know Todd well but felt like I did after reading your nice article about him,” Ramon Yarborough, retired publisher of The Fayetteville Observer, writes in an email about Todd Lecka.

“I just read your moving tribute to Todd Lecka, and what a moving tribute it is,” John Byrd of Spring Hill, Tennessee, writes in an email. “He was one of the finest men I have had the occasion to know. You captured the man perfectly with your words.”

“Bill, thank you for the beautiful tribute to Todd,” David Callahan, president of Putt-Putt LLC, writes in an email about Todd Lecka. “I was delighted when I read your column. Todd was a mentor to me in my early years and remained a friend for almost 50 years. I had the good fortune of having a nice visit with Todd earlier this year. We shared many memories both personal and business. Todd’s contribution to Putt-Putt and the franchise system over the years was enormous. I plan to share your tribute with the franchise system.”

“Bill, your commentaries are always good,” Walter Greene writes in an email. “The Sept. 11 column on Rakesh and Vinita Gupta was ‘spot-on’ concerning their medical excellence and community activities. It is inspiring to all. Thank you.”

Nell Sexton was as much a part of Highland Presbyterian Church as the white columns leading into the sanctuary, having worked as the administrative assistant to multiple senior pastors for 51 years at the place of worship with the steeple overlooking the Haymount business section of town. Church members over the years called Nell Sexton first, the pastors second. Nellie Sexton was 92 when she died on Sept. 12. Mrs. Sexton was buried at Lafayette Memorial Park, with former Highland Senior Minister Ernie Johnson officiating the service.